The Politics of James Connolly. By Kieran Allen. Pluto Press, £9.95. 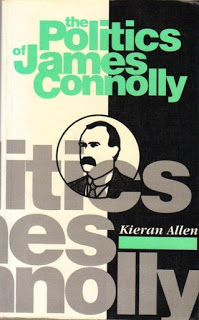 James Connolly has always been an enigma. How did someone who at the time was the General Secretary of the ITGWU, Ireland’s leading trade union, and who a few years previously had been a revolutionary socialist who had participated in the so-called “impossibilist (anti-reformist) revolt” in the SDF in Britain that led to the formation of the SLP in 1903 (which he joined) and the SPGB in 1904—how did such a person end up being shot by the British state for being one of the leaders of an armed uprising to establish a capitalist Republic in Ireland, so entering into the pantheon of Irish “national heroes”?
This book by a leading Socialist Worker member in Ireland does not provide the answer, but it does show the extent to which the SWP’s position on Ireland (“critical support for the IRA”) is mistaken.
According to Allen, Connolly was right to have participated in the Easter 1916 “rising” alongside the Irish Republicans; his mistake was to have done so as a republican rather than as a socialist, which wouldn’t have happened had he concentrated in the pre-war years on “building a party” rather than a trying to build a syndicalist trade union and a broad-church, reformist Labour Party in Ireland. This, of course, is the usual Trotskyist line of explaining why things went wrong by the absence of a vanguard party.

In so far as Connolly was still a socialist in 1916 (which is very much open to doubt), by taking part in an insurrection aimed at establishing an independent capitalist government in Ireland he betrayed the cause of international socialism. To the extent that the Irish Republicans had any views on how society should be organised they endorsed those of Arthur Griffith, the founder of Sinn Fein, who argued in favour of protection for nascent Irish capitalist industry and for the establishment of an Irish merchant marine and an Irish stock exchange. All these were eventually achieved either under Griffith himself or later under one of Connolly’s fellow putschists De Valera—without the working class in Ireland benefitting in any way.