The Speeches of Winston Churchill. Edited by David Cannadine, Penguin Books. 1990, £6.99.
Those who have admired Winston Churchill as a politician of unswerving principle may be shocked by the contents of this book. In reproducing some of 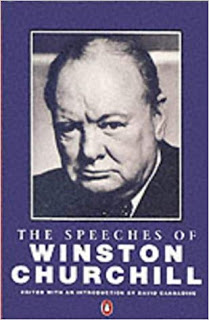 his more notable orations, from his maiden speech to the House of Commons in 1901 to his formal farewell speech as Prime Minister in 1955, this book shows Churchill’s career to have been one dominated by unoriginal thinking and contradiction, reinforced by a good deal of bluster. Anyone who could, even in the earlier part of this century, seriously describe religion as “the great agent of civilization” deserves to be treated with suspicion, but if his earlier speeches were ridiculous and overblown, some of his later ones were downright dangerous even by the standards of a hardened capitalist politician.
Indeed this book is useful in that it shows that Churchill’s political vacillations didn’t end when he left the Conservatives to join the Liberals and then left the Liberals to join the Conservatives again. Throughout his political career Churchill set up principles and alliances only to cast them aside at a later date. For instance, in his speech to the House of Commons on 11 April 1919 warning of the dangers of Bolshevism. he stated:

The British nation is the foe of tyranny in every form. That is why we fought Kaiserism and that is why we would fight it again. That is why we are opposing Bolshevism. Of all tyrannies in history, the Bolshevist tyranny is the worst, the most destructive, and the most degrading. It is sheer humbug to pretend that it is not far worse than German militarism.

What “sheer humbug” then for Churchill to have allied himself with the monstrous Stalinist dictatorship against the equally monstrous Nazi dictatorship from 1941-45, and to have joined with Stalin and Roosevelt in the carving-up of Europe at the Yalta Conference in 1945. Indeed, Churchill was able to blind himself to the realities of the “Bolshevist tyranny” under Stalin to such an extent that he could bring himself to say:

Marshall Stalin is a very wise man. and I would set no limits to the immense contribution that he and his associates have to make to the future. (House of Commons. 16 August 1945).

So much for principle and the lofty status of being “the foe of tyranny in every form”. It is also interesting to note that Churchill was head of a wartime Coalition government which included the Labour Party, with Labour leader Clement Attlee serving as Deputy Prime Minister. All the more strange then, that Churchill should say that a post-war Labour government would end up instituting “some form of Gestapo”.
If this book has a fault it lies in the solely chronological, rather than thematic, presentation of Churchill’s speeches. A book based on a more comprehensive collection of his speeches and articles dealing with Fascism, Hitler and the Second World War, including his praise for Mussolini’s corporate state and his admiration for the abilities of Adolf Hitler, would have proved even more illuminating.
Dave Perrin