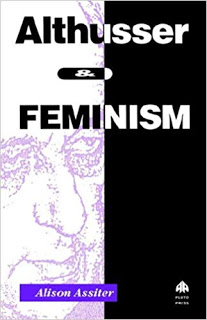 Who cares what Althusser has to say about feminism or, for that matter, what feminists have to say about Althusser? Had the French philosopher, Louis Althusser, never written a word, socialist thought would be none the poorer.

Like many books which claim to illuminate the hidden meanings of Marxist thinking. the pages are filled with references to the “esteemed” theoretical interpreters of Marx. Do these academic Marxologists not care that Marx urged philosophers to become actively involved to change the world rather than merely interpret the word? The turgid volumes of these Althusserian and anti-Althusserian commentators, whose outpourings are referred to by Assiter as “the literature”, have played no role in stimulating working-class understanding of the need for socialism. They have played with Marx’s ideas.

It is a pity that philosophers who want to offer abstruse language and cleverly-formulated abstract propositions as signs of their own brightness do not stick to writing about Aristotle or Descartes: at least that would keep them out of the way of the real struggle. Professional academics tend to prove themselves by taking relatively difficult ideas and making them appear incomprehensible. For example, take Marx’s view that the forces of production tend to determine the relations of production. Here is Assiter explaining Althusser’s description of “the relation between the various levels in the structure”:

How are we to understand these relations? The answer, surely, is by referring to the Spinozist conception of causality. Economic and non-economic practices will be related, not by means of Humean or Liebnizean causality, but by Spinozist “metonymic” causality, (p.26).

Bet you’d never looked at it that way before! This book is full of such tortuously expressed utterances.

As for the analysis—insofar as it begins to emerge after two or three readings of what is a sadly disorganised book—there are some good bits (such as Chapter Three on ‘Needs and Production’ which lays the foundation for a worthwhile study of how needs are determined) and some others which reflect poor thinking. Why is the working class referred to as “the working classes”? (p.35). There is only one. Why does the back cover say that the book deals, amongst others, with Foucault— who did have something stimulating to say for himself—but there is no mention of him in the text or even the index? Why does Assiter state that “since the forces of production were insufficiently developed, socialism could not have come about in Russia in 1917″? (pp.43-4). Surely Assiter knows that even had they been so developed. socialism in one country was out of the question. Anyway, the overwhelming majority of Russians lacked any socialist consciousness. To the book’s credit, it includes a satisfactory definition of socialism as a social system in which “people will have free access to all that is produced: they will be able to take what they want or need from the available wealth” (p.52). The writer does not say whether she favours this objective and is prepared to do anything practical to bring it about.