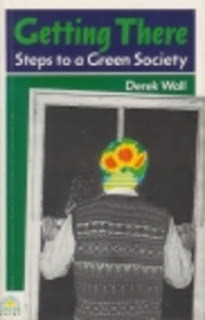 Getting There. Steps to a Green Society. By Derek Wall. Green Print. £4.99

During the Euro-elections last year Derek Wall was one of the Green Party’s three national spokespersons. He wasn’t heard of much as the media ignored him in favour of Sara Parkin. This probably pleased some Green Party strategists who feared his leftwing views might put off the muddle-in-the-middle voters they were targetting.

For example, while one platform speaker at the Green Party Conference last September proclaimed “we come not to bury the market economy, but to use it” (Independent, 22 September). Wall writes that “ecology is incompatible with the market”.

He is undoubtedly right here. Where wealth is produced by separate firms competing to make profits out of supplying a market, it is considerations of cost-saving and profit-making that will determine the materials and methods of production used: the short term will prevail over the long term and the cheaper over the ecologically appropriate.

Wall sees the solution as lying in the establishment of a decentralized society where much less would be produced and consumed than today and where these reduced needs would be mainly met locally. Money would not disappear completely but its role and influence would diminish drastically since peoples needs would be met directly (growing their own food, making their own clothes, etc) or on a barter, mutual aid or gift basis.

This might not be capitalism but it wouldn’t be socialism either. In any event Wall doesn’t call it socialism but a “Green society” and sees it as coming into being in embryo within capitalism (indeed as already having come into being in the form of “picnics and parties, collective allotments. co-operative buying, shared meals, local community news sheets, learning exchanges, tithing, ecological transport”) and eventually growing to be strong enough to dissolve capitalism into a network of “local economies”. This, according to him. is the way to “smash capitalism gently”.

It couldn’t work of course. People can’t just opt out of capitalism and begin satisfying their needs on a non-market basis. To launch and sustain this, money would be required (to hire or purchase land, premises and machinery, for instance) and, as long as capitalism exists, there is essentially only one way most people can obtain this: by going out and working for an employer for a wage or a salary. It is true that another possible source of income does exist in payments from the state. However, these are never generous and are in fact deliberately kept as low as practicable so as to offer a very miserable existence to those unable or unwilling to work for an employer.

Nor is the capitalist state going to allow state payments to be used to try to undermine capitalism in the way Wall suggests. But replies Wall, this time echoing official Green Party policy, a Green government would introduce a Basic Income Scheme under which everybody would receive a payment from the state, as of right and without means-testing, of an amount sufficient to satisfy at least their basic needs without having to go and work for an employer. The theory is that people could use this income to finance an “alternative economy”.

It’s a nice theory, but where’s the state going to get the money from? It could only come from taxing the profits of capitalist firms, but any attempt to raise the massive amount that would be required to finance such a scheme would provoke an immediate and widespread economic slump. Wall, however, believes that “bankers create money out of thin air” and seems to be advocating that the state should do the same and simply create the money it needs, just printing pound notes and handing them out! Unlike banks, the state could do this but as the amount of real wealth in existence would remain unchanged this would result in a massive inflation that would rival that in Germany after the first world war.

Actually. Wall is not quite that naive. He does realise what would happen should a Green government committed to such a programme ever come into office:

A Green government will be controlled by the economy rather than being in control. On coming to office through coalition or more absolute electoral success, it would be met by an instant collapse of sterling as ‘hot money’ and entrepreneurial capital went elsewhere. The exchange rate would fall and industrialists would move their factories to countries with more relaxed environmental controls and workplace regulation. Sources of finance would dry up as unemployment rocketed, slashing the revenue from taxation and pushing up the social security bills. The money for ecological reconstruction—the building of railways, the closing of motorways and construction of a proper sewage system—would run out.

But if this is the case, as it would be, a Green government would clearly be unable to help an embryonic green economy to develop by introducing a Basic Income scheme to allow people to escape from the wages system. In admitting this Wall is also admitting the non-viability of his scheme to “smash capitalism gently”.