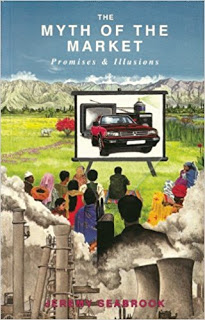 Jeremy Seabrook, the journalist and writer who switched from Labour to the Green Party in 1988, provides some compelling criticisms of the mythology surrounding the market and of the effect on social relationships of the domination of market values.

The market, he shows, does not provide freedom and ever more consumer goods for all; in addition to not satisfying needs adequately, it brings social disintegration in the form of increasing crime, mental illness. drug addiction and suicides. Under the dictatorship of the market literally everything has come to be bought and sold and the social bonds linking people are reduced to cash transactions between alienated. isolated individuals.

Somewhat surprisingly, however, Seabrook does not count himself as an opponent of the market as such. In answer to the question “well what would you put in its place”, he says we should think in terms of “reducing it to a minimal, functional level in our lives, putting it in its (necessary) place”: “Expel the market from all those places it has inappropriately invaded, reclaim autonomy and self-reliance wherever this is possible”.

The way to regain control of our lives, as individuals and as members of a genuine community, is not to go back to an ideal earlier stage of commodity production where the market had not yet emerged as a means of realising profits and was still simply a place where people bought what they needed (which is in effect what Seabrook is calling for). It is to do away with commodity production altogether and institute production solely and directly for use on the basis of the common ownership and democratic control of productive resources by the whole community. Until we do that we shall continue to be dominated by the market and its values.