Book Review: ‘It Doesn’t Have To Be Like This’

‘It Doesn’t Have To Be Like This’. By David Icke, (Green Print) 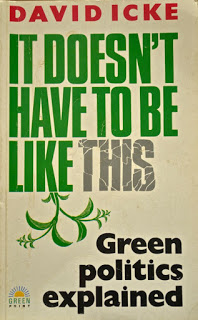 In this book, David Icke, Green party speaker and TV “personality”, sets out to explain the basics of “Green politics”. In so doing, he includes quite a lot of useful, though not startlingly original, material on topics such as the horrors of factory farming and the wastefulness of capitalism. The patronizing tone in which much of the book is written, however, detracts from its intended impact.

Yet there is much here that can be seen as encouraging, given that the Green Party are now supported by a sizeable proportion of workers. For instance. Icke argues that the Tories. Labour and Liberal Democrats are all basically the same, that causes should be attacked, not symptoms, and that the profit motive takes priority over human needs. He makes the point that green ideas concern not just the environment but virtually everything about the way humans live and how we abuse or protect our planet and its other inhabitants:

“Tethered pigs and nuclear weapons may not seem to have any connection whatsoever, but they have Both are created by the same state of mind.”

This passage, however, also suggests where Icke goes wrong.

He writes as if the real problem were “a state of mind”, as if things could be solved just by thinking differently and changing our behaviour accordingly. He does claim that the real enemy is. as he calls it, “the system”, but he describes this as:

“a form of economic thinking that sees the profit figure at the bottom of the balance sheet every year as the only measurement of success.”

His solution is to stress other aspects of production besides profit, especially the environmental impact. The tax system will be manipulated to make it cheaper for companies to protect, rather than poison, the environment. He describes this as “turning the present system on its head”, but like all reformers he is just proposing minor adjustments and ignoring the fact that capitalism must have profits and will get them however it can, no matter what the legislators say. This need for profit cannot be evaded by passing laws saying that other things are more important: it can only be ended by doing away with capitalism. For all their self-proclaimed radicalism. Icke and the Greens show no appreciation of this point at all.

Nor do they understand the class nature of society, and they assume its continuation. They propose a Basic Income for everyone, whether employed or not, to cover essential living costs. Large companies would be discouraged by a tax based on company size, while the United Nations will monitor the activities of multinationals. Icke offers a eulogy for Nicaragua, which looks even less convincing since the electoral defeat of the Sandinistas.

This book accurately reflects green politics, in combining a growing awareness of some of the consequences of capitalism with muddled and petty reformist policies.