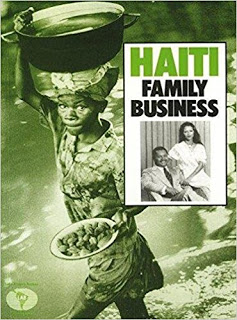 The recent political unrest in Haiti, resulting in the flight of pitiless dictator “Baby Doc” Duvalier. makes this study particularly timely. A byword for terror and corruption, the country has a history of armed intervention by governments and an undeveloped political system in which presidents have been wholely corrupt. Prince shows that the people of Haiti have been suppressed by arrest, brutality and imprisonment and that this pattern has been consistent since its establishment as a French colonial possession in the seventeenth century.

Haiti has been independent since 1804. although it was in debt to France until 1922 and has been financially dependent on the United States throughout the twentieth century. François Duvalier was elected president in 1957 and proclaimed life president in 1964. The dynasty was continued after “Papa Doc” died in 1971 and his son Jean-Gaude (“Baby Doc”) was proclaimed President-for-Life in the same year.

Prince describes Duvalierism as “a black nationalist ideology with a radical rhetoric” which claims to be opposed to the “ideological intolerance of a levelling and inhuman communism” (p.28). The regime controlled national finances for personal gain without feeling a need to reveal the extent of its tax income or disbursements. As Prince points out:

the continually widening gulf between the corrupt and luxurious lifestyle of the elite and the wretched conditions of the mass of the people has produced further tensions, (p.34)

Duvalier’s power base was dependent on the United States and the business elite of Haiti. Security was maintained by the Voluntaries de la Securité Nationale, who did not receive salaries and consequently practised widespread extortion of cash, goods and crops. Their efforts tended to concentrate on political party leaders, journalists, trade union activists, church figures and community development workers. After 1977 there was some cosmetic relaxation of oppression but in May 1984 all political activity, except that in support of Duvalier. was banned. In April 1985 there was a concession allowing political parties, but subject to the guarantee of Duvalier’s Presidency-for-Life. There was a promise of elections in 1987 but only approved political parties would be allowed to participate. In other words, the system did not permit serious opposition but only variations of Duvalier.

According to the World Bank, 78 per cent of the rural population and 55 per cent of the urban live at or below the level of absolute poverty. In a country where the state is the largest landowner the Duvaliers were the main beneficiaries. At the same time Haiti is the recipient of massive foreign aid. primarily from the United States. This actually adds to Haiti’s problems for, according to Prince, the distribution of free food undermines the market so that “aid actually exacerbates problems of poverty and dependence” (p.46). There is also the problem of “free” food being sold in the market place.

Haiti epitomises the corruption of capitalism at its most blatant:

One per cent of the population receives 44 per cent of national income but pays only 3.5 per cent in taxes. An IMF team which visited Port-au-Prince early in 1981 found that US$16 million had disappeared from various state bodies over the previous three months They also found that President Duvalier had obtained US$20 million from government funds for his personal use in December 1980. and the central bank had been instructed to pay his wife Michèle a salary of US$100,000 a month, (p.51)

This is a country whose gross external debt in 1983 was estimated at US$859 million and in which 90 per cent of the population live in destitution and squalor with an income of less than the minimum wage of US$3.00 a day.

The United States has an uneasy relationship with Haiti, condemning its corruption and incompetence yet maintaining close ties because of its “friendly government” status.

One grotesque aspect of Haiti’s poverty was the export of blood. With infant mortality so high, surviving Haitians are rich in anti-bodies:

At different times an estimated 6.000 donors sold their blood at US$3.00 a litre, and five tons of blood a month were shipped to US laboratories run by companies such as Armour Pharmaceutical. Cutter Laboratories and Dow Chemicals. (p.80)