Big Blue by Richard Thomas DeLamarter (Pan £4.99.)
Big Blue is IBM, the American computer company which is the world’s most 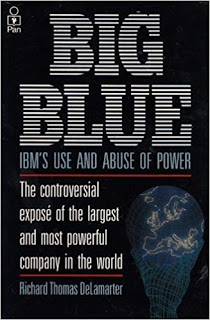 powerful and profitable corporation. For thirteen years it was the subject of an anti-trust case brought by the US government, which was eventually withdrawn by one of Reagan’s puppets in 1982. DeLamarter spent eight years working as a government economist on the case, and this book is his interpretation of the evidence provided, based largely on material from IBM’s internal files.
Different readers will no doubt draw different conclusions from the book: some may even see it as a recipe for how to run a successful company. What strikes a socialist reader is the amount of effort devoted by IBM simply to defeating competitors or would-be competitors, and their methods of maintaining and extending their power.
Contrary to the popular image (which the company has worked very hard to build), IBM’s products are not particularly reliable or technically advanced. Prior to the development of computers, IBM had a big share of the punch card accounting machine market, which gave them a larger sales and repair network than any other rival. Even though Remington had the computer market to itself for a couple of years, it was IBM that captured the lion’s share of sales by installing the new machines alongside the existing ones (on which they were at first partially dependent). The first IBM computers were deliberately priced to lose money and so undersell their competitors, who lacked the financial resources to reduce their own prices.
Having beaten off most of their rivals, IBM were able to keep their, dominant market share by exploiting software lock-in and price discrimination. Software lock-in refers to the fact that once programmes have been written for a particular type of computer system, and staff trained to operate it, a company will find it prohibitively expensive to switch to another system, and so will tend to stay with its original choice and simply add on updates, however inefficient they are. Price discrimination meant setting prices relatively low where there was competition (for example, for small-scale systems which would be a customer’s typical initial purchase) but relatively high where there was no effective competition (extra peripherals or computer memory). IBM was quite prepared to be flexible in this respect, drastically cutting the price of memory when independent producers began to challenge its position, and to be threatening, dropping unsubtle hints about likely maintenance problems to customers who considered buying non-IBM equipment to add to an IBM system. The company’s executives were also willing to use their influence with banks and finance companies to starve competitors of funds.
In the early sixties, General Electric began to win large orders for a computer specifically designed for time sharing (whereby different operations are performed concurrently). To boost its own sales, IBM announced a new machine, model 67, intended for time sharing, and at a low price. Model 67 never attained its proposed technical performance, but it did achieve the more important (for IBM) goal of killing off the competition. General Electric saw its sales drop off, and in 1970 ceased to make mainframe computers. The model 90 was another IBM machine that was designed and launched not as a technological advance, but purely to damage a rival company, in this case Control Data Corporation
In spite of the sometimes tedious amount of detail, DeLamarter’s book provides an interesting look behind the scenes of capitalist business practice. It shows very clearly that profitability and “success” in capitalist terms have nothing at all to do with meeting people’s needs.
Paul Bennett