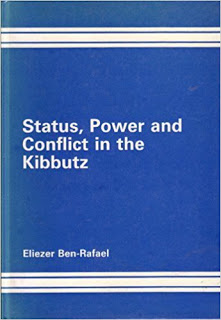 Status. Power and Conflict in the Kibbutz by Eliezer Ben-Rafael, Avebury 1988

The first kibbutz was established in 1910 and the movement now involves about 3.5 per cent of the population of Israel. This study is concerned with systems of stratification that have arisen in Kibbutzim and not with an overall analysis of their social organisation.

Kibbutzim are democratic to the extent that all members are entitled to participate in all debates and top executive positions are elected bi- or tri- annually. The absence of private ownership of the means of production and the irrelevance of money in defining status also make the kibbutz an interesting phenomenon. Yet we ought not to forget the existence of hired workers, who participate in the production process but are not commune members. With an average membership of 300-400 the kibbutz is also a very limited alternative.

The absence of wages or shares ensures that material differentials do not create social distinctions. although social status exists as “a function of one’s prestige (esteem and sympathy) and power (influence, authority and independence)” (p.33). The fact that kibbutzim are entrepreneurial also means that prevailing social perspectives are carried through to the workings of the kibbutz, with top executive posts often limited to those with specialist abilities.

Ben-Rafael argues that the kibbutz represents a conflict between the spirit of democracy” and the “spirit of capitalism”; increasingly it is the latter that prevails. This affects not only internal stratification but the relationship of the kibbutz to its environment. Increasingly, due to professionalisation of jobs, members must look beyond the kibbutz for employment. The philosophy of the kibbutz has also undergone changes — the family is reasserted and early notions of equality between the sexes have not been achieved. In short, capitalism has inevitably had its way.