This book is about women and crime. Bardsley interviewed a number of women 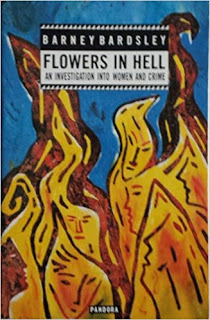 prisoners and ex-prisoners in order to find out why women get involved in crime. She gives the answer more or less straight away: for the overwhelming majority, in the words of one ex-prisoner, it is “because they cannot find an alternative way of making enough money”. Some women may break the law out of anger and frustration, or for kicks, but for most it is a desperate attempt to make ends meet.

One of Bardsley’s aims is to expose and get behind the image of the stereotypical male criminal. Women in prison, she claims, have not just committed a crime but have “rebelled against their femininity”, contravening the picture of women as passive and vulnerable. This is supposedly why women are far more likely to go to prison for a first offence than men are, and why far more female than male prisoners are treated with mind-altering and hypnotic drugs.

The appalling conditions in prisons are stressed. and a recent case is cited of a woman who died in prison after being refused access to a doctor. She was charged with stealing goods worth 66p.

Bardsley fails to show that there is anything special about women’s involvement in crime and prison which doesn’t also apply to men. But the book has some value in showing how the legal system is used to control and intimidate the powerless and poverty-stricken.