Why don’t teachers teach like they used to? by Rachel Pinder. (Hilary 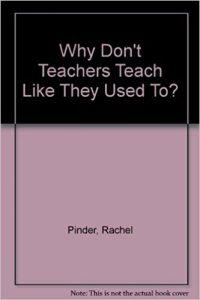 This old Chinese proverb forms the opening lines of Rachel Pinder s informative, sometimes amusing and always very readable book. Having spent her working life in teaching and the last ten years before retirement as headteacher in Inner London, she relates the history of teaching by both “progressive” and ‘ traditional” methods over many centuries up to the present. In the process she exposes confusion, if not total ignorance, as what constitutes “traditional” methods; what has. and has not. been tried; and the results achieved by the different methods.
In 1510 Dean Colet. founder of St Paul’s School, criticised “traditional teaching by rule and formal methods”. Richard Mulcaster. High Master of St Paul’s in Tudor times, complained about teachers who “think it the best that boys should fruitlessly run through all the rules learned by heart but not understand.” Elizabeth Lawrence in The Origins and Growth of Modern Education goes even further back, quoting Plato: “Enforced learning will not stay in the mind. So avoid compulsion and led your child’s lessons take the form of play”. It appears therefore that “progressive” methods have been advocated and used for 2000 years. Does that make them “traditional”?
Professor Jean Piaget, an eminent Swiss psychologist, refers thus to John Amos Comenius (1592-1670): “Comenius may undoubtedly be considered as the founder of a system of progressive instruction adjusted to the stage of development the pupil has reached.” Comenius said that learning should be in four stages: examine; question; investigate; determine. In 1641 he was invited by Members of Parliament to visit England and set up a school system based on his principles; unfortunately the Civil War intervened.
Although the beginnings of “progressive” education are often credited to Rousseau, it is obviously much older than that. In a review it is neither possible nor desirable to quote every example but the following extract from Richard Edgworth’s (1744-1817) Essays on Professional Education perhaps gives a key to Mrs Thatcher’s obsession with “returning to basics”

The first object should not be to teach them reading or grammer. or Latin or arithmetic . . but gradually to give them the desire to learn and the power to attend . . . they must be taught to think (our italics)

Politicians’ exhortations since 1976 that schools should “get back to basics” shows an alarming degree of ignorance and apparent unawareness of school inspectors’ reports over the past 100 years. The latest of these, in 1981. bears great similarity to one within over a hundred years ago:

There is no evidence that a narrow curriculum, concentrating only on the basic skills, enables children to do better in these skills: HM Inspectors’ surveys suggest that competence in reading, writing and mathematics may be improved where pupils are involved in a wider programme of work and if their skills in language and mathematics are applied in a variety of contexts.

In 1858 the Newcastle Commission was appointed to investigate education and make proposals. One of these was that children should be examined annually by an inspector and schools paid “by results”. This was introduced in 1862 and Robert Lowe. Vice President of the Privy Council for Education said in the House of Commons:

Examinations were based on a centrally controlled curriculum and although teachers were not forbidden to teach other subjects, there was great pressure to ensure that children would pass the examination rather than that they should learn anything worthwhile. The system worked as far as government expenditure was concerned; this dropped from £813,441 in 1861 to £636,806 in 1865. In Curriculum Change in the 19th and 20*h Century Gordon & Lawton quote from the 1871 school log-book of a Welsh headmaster:

Believing that one-fourth of the school time that was devoted to subjects not recognised by the government and consequently not paid for by grants, had the effect of keeping a well-informed school but causing the percentage results to be lower than those of schools that are mechanical in their working and unintelligible in their tone. I have been compelled against my inclination to arrange that less time be devoted to them in future and more time to those that pay best.

However this teaching by rote did not produce workers adequately fitted for their role and the system was gradually eroded, being finally eradicated in 1890. How long will it take this century for realisation to dawn that “traditional’ teaching, according to official definitions, not only stunts the mind but will produce a generation ill-equipped to provide adequately the labour required by modern capitalism?
Towards the end of the book Rachel Pinder talks of education which is not based only on lessons but also on the involvement of parents, family and friends in widening children’s experience and therefore knowledge. This is a concept with which socialists would not disagree.
Eva Goodman