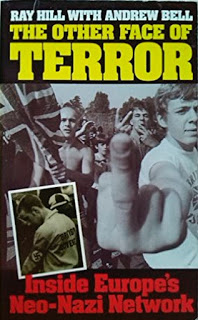 This is the story of Ray Hill, the nazi activist turned “mole”, who successfully infiltrated both the British Movement and British National Party while working for the anti-fascist magazine Searchlight. Having become involved in far right politics during the 1960s, Hill emigrated to South Africa in search of a standard of living denied him in Britain. It was there that he came to reject the racist policies that he had embraced for some years earlier. The turning point came when he was confronted on a roadside by a homeless Indian family – they had been evicted as a direct result of a campaign organised by the South African National Front, of which he was then a leading member.

Hill returned to England at a time when the British extreme right was in turmoil after the NF”s debacle in the May 1979 General Election. Under the direction of Searchlight journalist Gerry Gable he re-established many of his old links in the British nazi movement. During the next four years he was able to gather evidence of the British far right s growing involvement with European terrorist groups and was largely responsible for the prevention of a major bomb attack on the 1981 Notting Hill Carnival.

In this book Ray Hill lays claim to being the primary reason for the demise of the British Movement in 1983. He argues that by promoting himself as a rival leader to Mike McLaughlin he was able to orchestrate a split from which the British Movement never recovered. Although the British Movement has now ceased to exist as an organisation, the ideas that it held have persisted. Many of its members – like Hill himself – joined John Tyndall’s British National Party. Indeed, Ray Hill’s attempts to damage extreme right groups structurally has done little or nothing to stop the spread of the racist ideas he now abhors. An illustration of this is the situation at present in the National Front Despite the fact that it is split into two warring factions it has increased its membership and support considerably.

As Hill partially realises, the only lasting challenge to fascistic and racist ideas must come through political education. Groups like the NF. BNP and British Movement are the organised expression of an ignorance and prejudice which stems from the material basis of capitalist society. As such they can only be defeated when the working class understands capitalism and decides to reject it in favour of socialism.