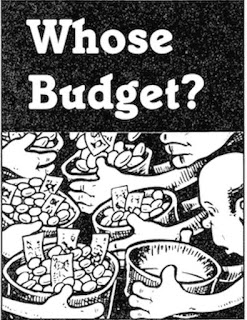 Every year, in the months before the Chancellor of the Exchequer makes the Budget speech, the media engage in the popular game of guessing what changes in taxation will be made and giving advice about what the changes ought to be. The professional politicians concentrate on the second aspect: each one. according to party, telling us how, if the government adopts the right financial and taxation policy, the whole nation will benefit, the “right” policy being the one at present advocated by the Tories, the Labour Party or the Alliance. The detailed remedies are sharply divided. Increase income tax and the corporation tax on company profits, or reduce them? Increase government expenditure or cut it down? Get government revenue mainly from income tax or from VAT? Spend more on defence or on education and the health service? Go for more inflation and rising prices or less? The variety is endless.

There are a few things the three main parties have in common, as shown by their programmes at last year’s general election. They all promise to reduce unemployment, to do something to help the poor and to get rid of class divisions in society. (The Alliance called their Programme Britain United). Over the size of government expenditure they divide into two camps: the Tories want to cut it down, while the Labour Party and the Alliance want it to be heavily increased, these two conflicting policies being their main remedy for unemployment. The two arguments go like this: The Tories say that if the government spends less and therefore raises less by taxation and borrowing, this leaves more for the public to spend, which creates more jobs. The other two parties say that if the government spends more this creates jobs and reduces unemployment. The Alliance programme put it:

We will give more spending power to the poorest people in our society, which will itself generate more economic activity.

Both arguments are nonsense. Transferring “spending power” from the government to the public or from the public to the government does not increase the total and does not generate anything. In the years of rising unemployment from 1979 government expenditure not only went up sharply every year but represented also a higher proportion of total national income. Another test is to look at what happened when government expenditure was consistently lower than it is today. Measured against total national income, pre-1914 governments spent less than a fifth of the amount now being spent. But that low expenditure no more prevented the Great Depression, with its heavy unemployment, which lasted for 20 years from 1875 to 1895, than did high expenditure prevent the depression which began in 1979.

We don’t now hear of inflation itself being advocated as a cure for unemployment but that was Labour Party policy in the 1930s and as late as 1982 a member of the TUC General Council, Clive Jenkins, was advocating inflation “to create millions of jobs ” (Financial Times 27 October 1982). Inflation should not, he said, exceed a rate of 14-15 per cent a year. Events gave him his answer: between 1978 and 1981 the inflation rate averaged 14¼ per cent a year and unemployment went up from 1,383,000 to 2,520,000. The following year it went up to well over three million.

Most workers are convinced that they have a vital interest in the Budget because it can raise or lower income tax (PAYE), and affect the price level. They believe that they would be better off if PAYE was reduced and if prices did not rise. Of course at the moment the changes take place, but in the long run the workers’ standard of living does not depend on whether PAYE or prices are high or low; it depends on whether capitalism is expanding or in depression and on the effectiveness of trade union organisation. The question of wages and tax was dealt with by Adam Smith in his Wealth of Nations (1776). If, in given market conditions, an employer can get the workers needed only by paying them £200 a week, a tax on wages has to be paid by the employer because, in these market conditions, it is still necessary to offer take-home pay of £200 a week. In the 19th century governments accepted that conclusion and income tax was not levied on wages.

After the introduction of PAYE the amount deducted from wages has been consistently high, for many workers 25 per cent or more but the average purchasing power of workers’ take-home pay is higher now than it was before PAYE and, with some short-term setbacks, has continued to rise in spite of a massive increase in prices. It has continued to rise since production began to expend again in 1981 and is now about 15 per cent higher in real terms than it was in 1979. In spite of heavy unemployment employers have only been able to get the kind of skills they need by paying more for them.

The generally accepted view is that a direct tax like income tax cannot be “passed on”, but some economists take the view that corporation tax on company profits costs the companies nothing because they can get it back by charging higher prices. William Keegan, economics editor of the Observer recently wrote (24 January 1988): “He [the Chancellor] belongs to the school of thought that, in the end, it is the consumer who foots the corporate tax bill”. This is a curious belief. If true, why do companies and the Confederation of British Industry keep urging the Chancellor to reduce the tax? Broadly speaking companies sell their products at what the market will bear. They cannot, at will, ignore market conditions and charge more than the market will bear if corporation tax goes up.

What the Budget contains is the outcome of conflict between different sections of the capitalist class, each trying to unload on to other sections the inescapable costs of government. Hence the representations made to the Chancellor before the Budget giving the reasons why he should reduce, or at any rate not increase, the amount levied on the group making the representations. Last year the brewers and distillers got their way and duty on alcoholic drinks was not increased. The tobacco trade, in spite of their argument that they were being “ruined” by cheap imports and high duties, had to put up with another increase.

Coming back to wages it is instructive to see what happened in the latter part of the 19th century. Having been weak and quite ineffective the trade unions grew rapidly in membership and organisation. The study made by Professor Bowley and G.H. Wood of wages and prices showed that between 1870 and 1900 average real earnings of the workers, after discounting price changes, rose by over 70 per cent (the table was reproduced in An Introduction to the Study of Prices by Walter Layton). The organised workers had been able to get a share in increased productivity and also to cut into profits. Frederick Engels, who had watched this going on. noted in 1892 “the remarkable improvement of the conditions of the workers in the great trade unions”.

Where do the three parties, Tory, Labour and Liberal, stand on the struggle of the unions to get higher wages? They all profess to approve of trade union organisation but. as governments, their chief concern is to maintain profits by preventing what they call “excessive” wage increases. Every government since 1945 has introduced some kind of “incomes policy” to keep wages down. Under the Labour government of 1945-51. the Chancellor, Stafford Cripps, laid down the principle that wages must not be increased because prices had gone up; the only justification for higher wages had to be increased productivity. Thirty years later, in the Winter of Discontent of 1978-9. the Callaghan Labour government tried to restrict wage increases to five per cent while prices were rising by 10 per cent. In their 1987 Election Programme the Alliance had a proposal to discourage employers agreeing to wage increases higher than the government wanted, by imposing a special tax on the profits of such employers.

The working class should disregard how the capitalists choose to frame their Budgets. They should look to their own organisations, remembering however that there is a limit to what the unions can do. As Marx pointed out. wages cannot rise to the level at which the employers cannot make a profit. He also called on the working class to solve their problems by establishing socialism.