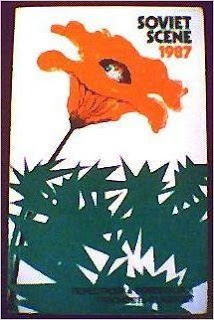 This book is a collection of articles and interviews translated from the Russian press. Despite being produced by the foreign propaganda authorities in Moscow, it nevertheless contains some very revealing material.
The main themes dealt with are perestroika (restructuring) and glasnost (openness, transparency). One illustration of the latter is an article that appeared in Pravda on 16 March 1987 denouncing what had been going on in the Central Asian republic of Kazakhstan under the local Party boss, Dimash Kunaev, who was deposed at the end of 1986:

A select circle of leaders throughout the republic built themselves veritable stately homes — palatial residences and hunting lodges with saunas, greenhouses, billiard rooms, cinemas and swimming pools. These were luxuriously furnished with all the trappings of a princely lifestyle.

This circle also, explains the editorial introduction to the article, “kept their ’personal’ cattle among the herds of the collective and state farms of Kazakhstan’s Urals Region alone. Some of them had 250 and more sheep kept for their own benefit and dozens of heads of cattle and horses”,
Gorbachev and his clique obviously felt that this was going too far as it brought into disrepute the whole nomenklatura and their system of institutionalised privileges (country homes, hunting lodges and the like, if not herds of cattle). Kunaev and his friends and relatives were purged, especially as Kunaev had been associated with Brezhnev.
Restructuring is introduced by an interview with Abel Aganbegyan, the economist closely associated with this reform. Restructuring is basically an attempt to revitalise the Russian state capitalist economy by freeing enterprises from bureaucratic central control by the state and telling them to go out and maximise their profits.
In Russia the main means of production are controlled by separate state enterprises which pay a percentage of their sales receipts to the state as a tax on their turnover and receive capital for further investment from the state either as direct allocations of equipment or as loans from the State Bank. Up till now the activity of enterprises has been closely controlled by the central state authorities by means of legally-binding directives whose application has been verified by a host of inspectors.
Restructuring involves giving enterprises freedom from state control, both to trade with other enterprises and to keep and invest more of the profits they make. This freedom is to be guaranteed by law. In return enterprises are going to be expected to seek to maximise profits and to practise strict profit-and-loss accounting, so as to build up a fund to finance more of their investments themselves as well as to repay, on time and with interest, the loans they get from the State Bank.
An article from Pravda of 12 January 1987 is very revealing in this respect. Entitled “Putting the Roubles to Work”, it states:

The role played by profits from production in accumulating money and strengthening the financial base of production is growing. Profits today amount to 200 billion roubles. For some time we have shied away from talking very much about profits. Many people still thought in old-fashioned terms taught by certain political economists to see profits as something pertaining only to a capitalist system.

By political economists such as Karl Marx, for instance. Pravda, however, has found someone to replace Marx: Micawber!

The main law of the financial activity of any industry and any enterprise is that income should always be greater than expenditure. One of the characters in a Charles Dickens’ novel said that if a person earns £20 and spends £19 19s 6d. the result is happiness. But if he spends £20 0s 6d. the result is misery
In our day too, any enterprise manager has to assess income and expenditure and ensure a profit. Otherwise, the enterprise cannot be self-financing.

Enterprises in Russia have always sought to balance their books but until now it has only been the central state that has been concerned with maximising profitability and this only at the level of the economy as a whole. The change that restructuring is designed to bring in is that, from now on, enterprises will be given the green light to seek to maximise profits at enterprise level. This represents a change from a rigid state-controlled capitalist economy to a more market-motivated one.
A leading sociologist interviewed in Moscow News (1 March 1987) attacks the “free “health service in Russia and suggests that there should be charges for certain types of medical treatment. With such views being expressed in Russia, no wonder Thatcher and Gorbachev get on so well together.
Adam Buick