Book review: After the holocaust 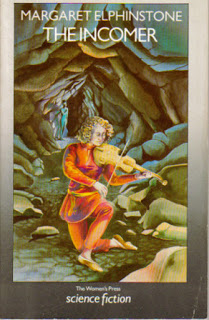 Some of the best, and best written, accounts of moneyless societies are to be found in the pages of science fiction novels. Books such as The Dispossessed by Ursula Le Guin and Woman on the Edge of Time by Marge Piercy present convincing descriptions of egalitarian non-market societies. The Incomer doesn’t rank with these, but does have some interesting comments on life without exchange relations.

The scene is an isolated village in the south of Scotland, after some vaguely alluded to holocaust, “when the world changed’. Industry seems to have vanished and agriculture has reverted to a subsistence level, with soils and seas recovering from pollution. The village. Clachanpluck. does make use of money in its dealings with other towns and villages but its internal functioning does without buying, selling and wages. Here are one character’s comments when offered money in return for putting someone up:

‘Well, thank you.’ said Bridget doubtfully, looking at the coin as if it might bite her. ‘I won’t deny it might be useful. but I know that money is an evil thing, which can bind a person, so one remains in bondage to another. There’s a powerful kind of magic to it. and it’s done more harm in the past than can be told . . . I know too much about the past. They used money to win people away from their land They took their birthright from them and made them sell themselves for money.’

The mini-society of Clachanpluck is not socialist (socialist society will not be matriarchal, nor will we hound rapists to death) but the picture of a community based on co-operation and production primarily for use should make the reader reflect a little.