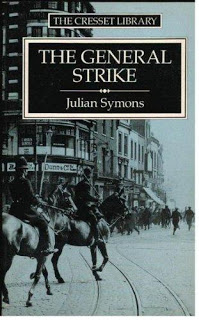 This is a re-issue, unchanged, of the original edition first published in 1957, except that it has a short preface by the author commenting on the 1984 miners’ strike and some other matters.

The book provides a well-documented account of the events leading up to the so-called “General Strike”, which was called to support the miners in their resistance to wage reductions; the reasons why the TUC General Council called it off after nine days; the resentment of the miners at what they regarded as “betrayal”: and their ultimate total defeat after staying out for many months. It contains details of the statements and actions of all the leading figures, politicians, union leaders and others, with some critical observations by the author on the conduct of the strike.

Symons thinks it was a mistake to have called out the printers because this prevented the appearance of some newspapers which would have given publicity to the miners’ case, and left all the effective publicity in the hands of the government, through the radio and the official journal The British Gazette. The TUC ‘s own journal, The British Worker, was read only by supporters of the strike, not by the general public. He comments on the serious failure of communication between the miners’ union and the TUC. The two miners’ representatives on the General Council of the TUC were absent from London throughout the strike, so that the miners’ leaders were ignorant of much of what went on.

In his new preface the author says that in the 1926 struggle “the miners . . . deserved better leaders”. What all workers need, of course, is to rid themselves of the whole idea of “leadership” and themselves take on the responsibility of getting to understand the forces they are up against in the class struggle, including keeping in their own hands decisions about starting and ending strikes. But the author makes a sensible comment on the 1926 strike and the strike of 1984:

On both occasions the miners’ leaders greatly underestimated the power and resources of their opponents. which were far from fully extended. In 1926 the armed forces played a very minor role and in the later strike were not used at all. although the police on some occasions had an almost military role.

One thing is strangely missing — a statement about nationalisation. In 1926 it was the belief of the miners, the TUC. and the whole trade union movement, that the workers’ problems would be solved if only private ownership of the mines was replaced by nationalisation (state capitalism). And yet in 1984 it was the nationalised Coal Board against which the miners fought for nearly a year.