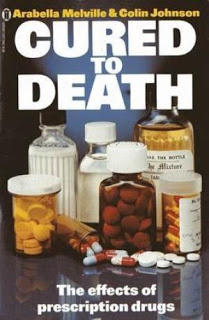 The authors’ aim in this well referenced book is to show that “Western medicine has made a fundamental error in allowing itself to become reliant on the universal use of drug therapy” (p.3).

The authors present a comprehensive analysis of the effects, on individuals and society, of prescription drugs and the factors involved in their use. “Drugs are manufactured by commercial organisations for the same reason as any other product: to make a profit” (p.4). The methods employed to increase these profits include high pressure sales techniques (for the so-called ethical products), falsification of test results, the dumping of drugs with proven dangerous side effects onto countries with less effective, or more corrupt, control procedures after they have been withdrawn from sale in other countries. The drugs industry have created unnecessary cases for treatment, promoted new diseases to meet the need for “cures” already discovered and moved towards mass medication in the name of disease prevention.

Also included in this analysis are the political power of the drugs industry, the inherent danger of all drugs and inadequacy of testing procedures, the difficulties of identifying side effects, the pressure on doctors, the conditioned attitudes of doctors, patients and the medical establishment and some harrowing case histories of victims of drug side effects.

Owing to the difficulty of identifying side effects in individual patients and the understandable reluctance of many doctors to consider the possibility that treatment prescribed by them may have caused harm, the only statistics available to indicate the extent of the harm caused by the mass use of drugs are those suggested by interpreting the results of epidemiological studies. The best estimates of drug induced disease in the population of Britain lead to a constant prevalence of two per cent, or over one million people. According to the authors the probable figure for drug-induced deaths in Britain is between 10,000 and 15,000 in an unexceptional year, at the current rate of prescribing (p. 108).

This book provides yet more evidence — if any were needed — of how the insatiable drive for profits, which is fundamental to capitalist society, damages health and destroys lives.