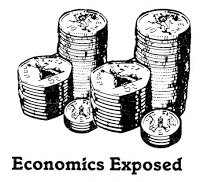 Millions of people in Britain and throughout the world are suffering the poverty and indignity of unemployment. It has become a cliche in the 1980s to say that we are in the depths of a recession. That is a simple phrase which contains a massive range of suffering, bringing with it increases in racist violence, alcoholism, illness and even suicide.

There are many myths and false theories about the cause of this mass unemployment. Perhaps one of the most popular is that with the least academic pretensions. It is widely stated that this vast waste of productive resources, the large-scale redundancies and resulting downward pressure on the wages of those still in work has all arisen because “British industry” has become less competitive. Workers, it is claimed, have been both lazy and greedy, with high wage demands and low productivity, and that therefore sales have fallen.

First, let it be said that the politicians and press millionaires who are particularly fond of promoting this myth are not to be seen for dust when any really useful productive work might be going on. However, there are several other reasons why this claim should be rejected.

In almost all of the most industrially advanced nations of the world, unemployment has gone up significantly in the last 10 to 20 years. It is true that the increase in Britain has been particularly rapid, but the problem is quite obviously world-wide and cannot therefore sensibly be seen as a “British” problem.
Second, is it the case that during the 1970s. for no reason, workers in their millions suddenly became more “greedy” and “lazy” than they had been in the 1960s? Such explanations for crisis are clearly fantastical. Moreover, it is a gross insult and distortion to refer to the productive majority in society in this way. Some of the most tragic victims of the recession are people who have worked themselves towards an early grave, building up their employers’ fortunes, only to be told in middle age that they are “redundant” to their company’s future plans for profit-making.

Thirdly, let us take this popular myth about the cause of recession to its logical conclusion. If it is our high consumption relative to productivity which is the cause of our problems, then the answer would be to work even harder, produce even more, and consume even less. Well, if that formula is the “answer”, you might wish you had never asked the question! The fact is, with a full use of modern technology and all of the resources available to us, it would be possible to meet needs far more adequately than at present.

The real problem is that within the present world-wide economic system, production takes place only if it will financially benefit the minority who own and control capital. You could work twice as hard for half as much, and yet still if the market system is passing through one of its periods of recession, your job will be at risk.

The market system which exists throughout the world today is rooted in competition rather than co-operation. Production levels are decided on the basis of guesswork, as companies estimate the activities of their rivals and the level of profitable sales they might expect. The vast network of production is balanced on this fragile foundation.

As the level of investment and production builds up by fits and starts, it is only a matter of time before one industrial sector or other overestimates sales potential and then has to make dramatic reductions in its level of investment. The market becomes “glutted”, profits start to decline and redundancies follow, leading to recession in other markets. This happened, for example, in the British steel industry in 1973-4, with 70,000 resulting job losses.

This then produces a knock-on effect on other industries (in the case of steel, these included shipbuilding, car production, metals and heavy engineering). With an imbalance or dislocation between these different industrial sectors, and the spreading problem of overproduction relative to the market, the recession becomes general.

This is part of the trade cycle of capitalism, which has passed inevitably through periods of boom and slump since it began. The recessions of the 1890s and 1930s, like the present recession, were part of this cycle. In future months we will be looking at how recession is caused in more detail. But our starting point, in dealing with the popular myths of the gutter press, is that British workers. like other workers across the world, are the victims of this process, not its cause.