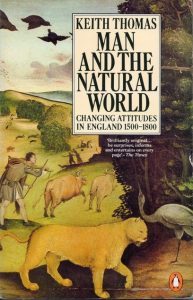 In his book Keith Thomas surveys the changing view of nature in England between 1500 and 1800. He uses a wide variety of contemporary sources to show what people thought about the landscape and its flora and fauna. He makes the point that whereas:

Nowadays one cannot open a newspaper without encountering some impassioned debate about culling grey seals or cutting down trees in Hampton Court or saving an endangered species of wild animal.

Only a few hundred years ago the idea that human cultivation was something to be resisted rather than encouraged would have been unintelligible.

What was it that altered the way people view the natural world? The author’s answer is that although the intellectual potential for concern for the natural world had always existed, the attitude only flourished with changes in the way society organised its production. Talking about the emergence of the animal rights movement, Thomas says:

the triumph of the new attitude was closely linked to the growth of towns and the emergence of an industrial order in which animals became increasingly marginal to the processes of production.

Similarly, the growth of towns led to a new longing for the countryside and the progress of cultivation fostered a taste for weeds, mountains and unsubdued nature. Even then, the concern did not extend to the point where actual human well-being was threatened (for example, butchers whose livelihood depended on slaughtering animals did not share the new compassion) which goes a long way towards explaining why even today when many people are concerned about animal welfare, river pollution and rainforest depletion and so, the problems still persist.

The world’s resources are not owned by everybody. They are owned by a small minority who use nature to produce goods to be sold in order to make profits. Production for profit means that costs must be kept as low as possible. In this atmosphere the cheapest methods of production must be used and the cheapest methods are rarely those which have a minimal impact on nature. (Take battery farming for instance, which is a direct outcome of the search for higher profits).

As long as production is carried on for making profits and not for needs the same problems of pollution, resource depletion and species extinction will remain. But the message of Keith Thomas’ book is that peoples’ ideas and outlooks can and do change and the fact that more and more people are becoming concerned about the way the environment is abused is encouraging. But campaigning for new laws and more conservation areas is not the answer. We need to get rid of a society where a small minority can manipulate nature for their own ends and replace it with one where we all have a real say in how nature is used.