Between the Lines: A Workers’ Guide to the Soaps

A Workers’ Guide to the Soaps 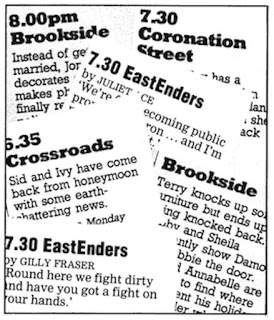 What political function do soap operas perform under capitalism? This might look like one of those pretentious academic questions which sociologists like to make meaningless noises about, but it is in fact a question worth asking. Millions of workers watch serialised dramas known as soap operas. (The term was coined in the USA where the soap companies used to sponsor TV serials.) The top two programmes in the British TV audience ratings — before news output or variety entertainment — are soap operas: EastEnders and Coronation Street. When a star in one of these dramas marries, falls ill, has a fight at a party or dies it is national news: remember the death of Pat Phoenix, who played Elsie Tanner in Coronation Street, which made front-page headlines in the national press last year?

The simplistic answer to the question posed is that TV controllers like to entertain viewers with fascinating drama and soaps do that. If we were living in a society where making people happy — satisfying their needs — was the criterion for production, then we might find such a reason for producing soap operas plausible. But we don’t and it isn’t. So. why do TV companies spend vast fortunes on producing soap operas? The first social function which they perform is to reinforce a picture of ‘reality’ — to show a designer-created world of social reality which viewers can use as a model for ‘life as it is . . . and always will be’. Soaps reflect all of the capitalist myths about human nature (a negative and unchangeable condition, of course) and the apparently inevitable ways of the world, including possessive relationships. buying and selling, employment and the rest of the anachronisms of life under the profit system. Soaps show workers that they are not alone in the madhouse of capitalism — everyone is in it and in it is the place to be.

Secondly, soaps perform a moral role of telling workers what is right (according to the ethics of the owning class) and what is wrong. Characters on soaps are shown to lose out if they do wrong and to prosper even if not at once — as a reward for good behaviour. In recent times the crude attempts at moral propaganda made by the soap producers have become more transparent than ever.

Thirdly, soaps are about continuity: because they are on regularly they offer a rhythm — presented as a natural rhythm — to life. Bombs may be exploding in Ireland, kids starving to death in Mozambique and riots going on in Leeds, but at 7.30 every Monday and Wednesday normality is resumed because the familiar theme music to Coronation Street is on the air. It used to be said that civilisation would collapse if the ravens ever flew away from the Tower of London (a more foolish example of nationalistic rubbish it would be hard to think of), but the modern equivalent is that as long as the locals in Albert Square are in their places between 7.30 and 8pm on a Tuesday and Wednesday life as we know it is still intact.

These three functions which the soaps perform are of great political importance to the capitalist system, for remember, it is a system which is wholly dependent for its power upon the unconsciousness (politically) of the working-class majority who are the consumers/victims of the soaps. It used to be the Churches which performed the role of explaining reality to workers, of laying down the moral code, and of providing a continuity and regularity to the life of the system. Now that the Churches are emptier than ever the TV screen is the new medium for such indoctrination and the soaps are an important means of achieving propaganda success. It is not being claimed that soaps are a conspiracy to make workers accept capitalism. The way that capitalism conditions its victims is more complicated and subtle than that. Regardless of how consciously the soap opera producers intend to serve the system, that is the political function which they perform.

The most crass soap opera of them all — a programme which has almost carved a reputation out of being so bloody atrocious that it is compelling viewing — is Crossroads. The acting and scripts have been the subject of many a TV critic’s merciless scorn, but the programme is not just dramatically awful: it is also a political drama. For example, it has for years conveyed the message that those who own wealth (in this case, the motel) do so as a result of hard work and, above all, superior intelligence. Conversely, the workers are all somewhat affable fools, lucky to be employed at all. My favourite character in Crossroads (a programme which, like everyone else who watches it regularly or occasionally, I deny having ever seen except by pure accident) is Benny, the mentally retarded skivvy who exists to be exploited by his bosses, patronised by his workmates and periodically ridiculed by the scriptwriters who evidently believe that being mentally subnormal is a terrifically funny condition and one well worthy of a few good laughs at the unfortunate Benny. In fact, Benny represents the ideal English wage slave: thick, compliant, loyal, uncomplaining and more willing to work than a horse on hormone injections. Benny is what they want us all to be. Don’t laugh at him: you might just be laughing at your own reflection in the TV screen.

EastEnders is a truly hideous soap opera. Indeed, for my money it is the worst. As a result, I do my best never to miss it. Its heavy-handed moralising is sickening; its stereotyping is offensive; its romanticised picture of life in London’s East End is a complete distortion (and worse still is its distortion of the East End’s past); and its manipulation of viewers’ emotions by means of cheap dramatic explosions is sinister. One of very many examples of what is foul about the programme is the recent story of Arthur Fowler, the unemployed and uninspired caricature of a prole. Arthur was caught stealing the Christmas Club  money, had a thoroughly unconvincing nervous breakdown in order to physically repent for his ultimate crime of taking money which was not his, went into a psychiatric hospital and came out an ‘adjusted’ man. Now Arthur — sorry, Arfur — takes every day as it comes, is genuinely thrilled when he is offered occasional casual work and realises how wrong he had been to transgress the law of property and how right the state had been to send him to prison for his sin. EastEnders is a programme about sin and repentance: most characters are usually in one or the other states. In times to come it will be seen for what it is: blatant, rotten propaganda of a pernicious form. Entertaining. yes: but then, so was witch-burning, I suppose.

Brookside is by far my favourite soap. You can see it on Mondays and Tuesdays (8pm, C4) or on Saturdays (5pm, C4). Like all soaps, you need to watch it for a few weeks before you will get into it, and my recommendation is that it is worth the time investment to do so because Brookside is probably the best TV drama available at the moment. It is clearly an anti-establishment soap and its depiction of life under capitalism is head and shoulders above the other soaps. But it too is a highly moralistic programme, setting out sometimes all too transparently to radicalise the viewer. Indeed, it is perhaps by watching TV manipulation being well executed in a programme like Brookside (where the temptation is to see the manipulation as an edifying process) that one can see much more clearly how the same techniques, but for different ends, are used in the other soaps.

Will there be soap operas in a socialist society? Who can tell? It is not for a small minority of socialists in 1987 to lay down a blueprint for how the socialist majority will decide to live. But the functions which soaps now perform will not be needed in a social system which has overcome the intense alienation of capitalism. Moralising drama will not be required in a society without leaders or led. The problems which occupy the minds of most of the characters in most of the soaps most of the time will simply not exist in a socialist society. That’s my view anyway — and in the absence of letters from readers expressing your views mine is the only view you’re going to get.

Your letters about TV programmes which you have liked or disliked and think worthy of comment from a political angle, or your comments on points made in Between the Lines should be sent to The Socialist Standard and will be considered for publication.