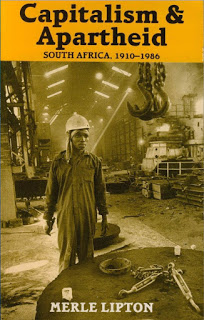 Defining capitalism as what we would call private capitalism, Merle Lipton argues in this well-documented book that capitalists (both private capital in South Africa and international capital with investments there) do not want, and never really did want, apartheid. In particular they do not want its application to the labour market (job reservation for whites, pass laws for blacks), seeing it as a costly and cumbersome brake on capital accumulation.

Lipton makes the point, however, that it would be a mistake to see capital in South Africa as a monolithic bloc with a single interest: different sections of the capitalist class have different interests and in the beginning some sections did support some aspects of apartheid:

Capitalists in SA have never been unanimously or wholeheartedly in favour of apartheid. During the first half of this century, the economically and politically more important farmers and mine-owners supported some major apartheid policies, which the less important manufacturing and commercial capitalists had less interest in or opposed. Over time, particularly since the mid-1960s, opposition to apartheid increased among all capitalists, particularly those in the fast-growing manufacturing and commercial sectors.

Today most sections of the capitalist class in South Africa are opposed to apartheid. Thus in 1975 the then President of the Chamber of Mines. A.W.S. Schuman. said “aside from the human rights argument — the right of a worker to sell his labour on the best market — I doubt whether we can afford restrictions which prevent the market from finding in a capitalist fashion its own level and a sound balance between supply and demand”, while the Natal Sugar Farmers declared in evidence to a government enquiry in 1977 that “workers should be allowed free labour movement and choice of employer . . .  no undue restrictions should be placed on the right of employers to employ whom they like . . . the abolishing of the present system of restrictive legislation and the encouragement of a free system of competition in an open labour market will ensure better utilisation of available manpower”.

But the demands of the South African capitalists go beyond merely instituting a free labour market in South Africa. They want, as a logical development of this, to give the black urban working class that has emerged a permanent stable situation. As Lipton puts it. speaking of the 1970s:

Increasingly, urban businessmen wanted their workers to have a stake in society, to live with their families in their own homes, and to be well supplied with shops, amenities, and entertainment. They believed this would reduce black turnover and increase competition for white jobs, and also make for a less explosive situation and a more contented black working and middle class, enjoying higher standards of consumption and providing a larger domestic market for their goods.

But even this would not be enough for the logic of capitalism in South Africa:

The strategy pursued by capital in response to black unrest therefore went beyond a reformist welfare programme; even when it did not explicitly embrace political reform, it envisaged a restructuring of society that involved a shift from the hierarchical racial structure to a class structure, which would be difficult to reconcile with separate political rights.

This case for a non-racial capitalism in South Africa (which Merle Lipton herself supports) has of course been consistently put over the years by Harry Oppenheimer. until recently chairman of the giant Anglo-American Corporation and by MP Helen Suzman, author Alan Paton and others, and is now explicitly advocated by the main white opposition party, the Progressive Federal Party.

But if, as is the case, South Africa is a capitalist country and if, as is also the case, apartheid conflicts with the interests of capital, why was apartheid introduced and why does it still exist? Here historical and political, and not merely economic, factors must be taken into account to explain that, although the capitalist class is the economically dominant class in South Africa it has not (except for two brief periods in the 1920s and 1940s) and still does not exercise complete political control.

The political party which has had an iron grip on state power since 1948 – the National Party – came to power as the representative of backward sections of the owning class in South Africa, in particular Boer farmers, with the support of poor white Afrikaner workers in the towns, mobilised under the banner of anti-English, anti-black and anti semitic Afrikaner nationalism. The NP used its control of political power to codify and legally enforce the already existing social and residential segregation (racial classification, ban on mixed marriages, separate facilities, etc), but also to try to go further and impose an economic segregation by preventing the emergence of a permanent African urban working class.

Naturally this eventually failed since, although political power can slow down for a while the economic changes that capitalism brings (in this case, the emergence of a permanent African urban working class) it cannot hold them up indefinitely. All that the vicious NP governments of the 1950s and 1960s were able to do was, at enormous human cost, to put the clock back for a while. Eventually, even within Afrikaner nationalism, an openly pro-capitalist wing emerged, based on the modem Afrikaner capitalist class that had developed with investments in mining, manufacturing and commerce and not just agriculture. These exerted pressure for “reform” for the abandoning of economic apartheid (ending the job colour bar. relaxing the pass laws, granting property and voting rights to urban Africans, and so on) which recent NP governments have accepted and implemented. The current state President. P W Botha, is in fact a representative of this verligtes (“enlightenened”) wing of Afrikaner nationalism.

The next step which the South African government is sooner or later going to be obliged to take will be the granting of political rights to Africans at national level. Botha has already conceded this in principle but, as Merle Lipton explains in the last part of her book and as is evidenced by the daily news bulletins, he has certain political difficulties in managing an orderly transition towards it. When it happens this will represent the end of the attempt, so costly in terms of additional human misery, to impose a colour bar inherited from colonial times on a modem capitalist economy. But the non-racial capitalist regime that would then emerge would still leave working class problems unsolved. It would merely mean that South Africa would have caught up historically with the rest of the modern capitalist world.