Book Review: Confusions of the Left 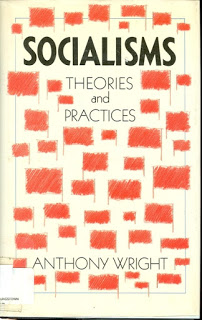 The title of this work is significant for the author argues that there must be a rejection of a single “correct” meaning of the term socialism for many interpretations are possible. Wright claims that those who deny the pluralistic perspective have embarked on a course which is “illegitimate, its basis flawed, its consequences damaging”. However, far from clarifying the meaning of socialism, this book merely adds to the general confusion associated with the term.

It would appear, according to Wright’s argument, that any claim to be “socialist” would be “legitimate”. However, he argues that in Britain there is no political party with a “Marxist basis” (thus excluding discussion of the Socialist Party), and concentrates instead on the ILP and the Fabians which he sees as the main school of “reformist socialism” in Britain.

Wright sees the Russian revolution as a turning point which led to Marxism becoming “Marxism-Leninism, with few prepared to quarrel about the hyphen”. Yet the term, Marxism-Leninism, simply adds to the general confusion since politically it has no meaning, or at least not for those with any understanding of the politics of either Marx or Lenin. Wright’s insistence that Russia proved that there could be different interpretations of socialism depending on the social conditions, seems to assume that socialism can be anything at all. In fact, Russia, since the revolution, rather than establishing socialism, has seen the development of capitalism – state capitalism – with the state as owner rather than private individuals. Lenin himself referred to state capitalism in the context of Russia and Wright might have done well to have read Lenin more closely.

According to Wright “the world is full of socialisms” and the plethora of definitions he presents us with is certainly confusing. Because the author rejects the idea of a single “true” socialism, or socialist tradition, he can therefore include discussion of many strands of left-wing thought which call themselves socialist.

Wright has a tendency to slip into cliche at the expense of argument. So, for example, he claims that Lenin was “socialist of the deed and not of the book” and. having provided a thumb-nail sketch of Marx, writes him off as having left “a profoundly ambiguous legacy”. Similarly the 1945 Labour government is described as a “vindication of the viability of a democratic socialist strategy” an observation that is merely stated, not argued for.

Wright argues that history has shown that the working class has abnegated its responsibility for establishing socialism and that this has now become the function of the “party”. And here we can see clearly Wright’s affiliation to Leninism rather than Marxism. But new confusions soon occur. Wright does not think that racial, ethnic, religious and sexual conflicts have a class basis. As a result he says that the need is now to build a “socialist movement of persuasion and reform capable of making a wide appeal to people of different social classes”. Thus in addition to the plethora of “socialisms”, we now have a plethora of social classes. Of feminism he writes

It is a major achievement of feminism not merely to have identified the limited stereotype of socialism’s traditional actor (male, manual, muscular) but to have identified the limited character of the wage-labour-capital relationship that underpinned it. Feminism has extended and enriched the definition of the socialist project, from “work” to “life”, and has extended the range of possible socialist actors in the process, (p. 115)

But such an attitude expresses the limitations of the “socialisms” that Wright discusses, rather than the limitation of socialism as such. The Socialist Party has always had a concern not just with “work” but also with “life”. And while we recognise that there are certain problems experienced by women in capitalism, those problems cannot be separated from the context of the class society in which they occur. Also, to focus on the particular problems of one section of the working class at the expense of the common problems experienced by all workers may result in divisive antagonisms between workers.

Wright dismisses Marxism with the self-contradictory statement that “every Marxist state is a dictatorship” and opts instead for what he calls “welfare capitalism” claiming that it can deliver what socialists have traditionally stood for, if the capitalist system is milked for what can be got out of it. But to adopt such a strategy would amount to accepting the crumbs of capitalism instead of seizing the banquet for socialism.

Socialisms: Theories and Practices ought to be retitled “Confusions of the Left: Claims and Counterclaims”. There is a tendency for ever more absurd statements to be made such as: “there is a whole range of Marxisms”. This is only true if we accept uncritically the claims of those who profess to be Marxists, or indeed socialists.

Wright concludes by observing that those who refuse to acknowledge “credible socialism” or socialism of a “realistic” kind, have not learned from “political and economic experience”. Of course this begs the question of how we are to interpret that experience and what lessons are to be learnt from history. Socialism is more than moral outcry in an uncaring world, as Wright assumes. He argues that both socialism and capitalism are compatible with despotism but only capitalism has been capable of providing democracy and political freedom. This leads him to opt for a “third way between state socialism and welfare capitalism” a solution which is as unrealistic as Wright obviously feels socialism to be.

This book is yet another attempt to undermine socialism. It pretends to be offering “realism” but in fact is little more than an avowal of capitalism and an apologia for the Left.