Your Money or Your Life

The NHS was set up shortly after the Second World War, after years of reformist pressure and pledges by the wartime coalition government of a better standard of care for workers as a reward for their wartime sacrifices. It was meant to be a health service that would be free at the point of use. Since then, it has been run down. Charges for some services have been introduced, and the NHS budget reduced.

Waiting lists for treatment are getting longer all the time. The simple explanation for this — insufficient funding by government — needs to be qualified. Recently, there has been an increase in overall NHS spending but this was not enough to meet the ever-increasing demand for health care. Hospitals have also been closed before new ones are ready to replace them. This has resulted in an increase in the number of people waiting for treatment and fewer hospital beds for them (fig.1). Hospitals in the cities have suffered particularly in this, because there has been a transfer of funds from urban to rural areas. 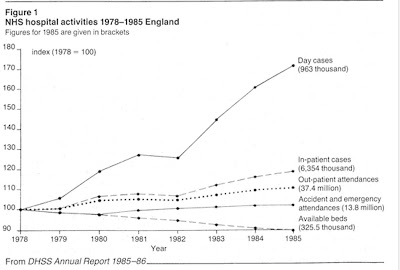 One way out for the government might be to lower the demand for health care, by taking steps to prevent disease. This is very expensive. The NHS has never been designed to prevent disease on a large scale — it is mainly a disease-curing service. It cannot give every person a check-up every six months. It cannot afford to repair dwellings that are poorly heated and ventilated, or dangerous to live in. It cannot afford to clean up the environment. It cannot ensure that everyone is provided with a balanced diet and a stress-free lifestyle. All these, and more, are necessary to prevent disease and therefore lower the demand on the health service.

Another way is to increase the supply of health care, by building hospitals and employing more health workers. In recent years this has been implemented to some extent but the queues are still getting longer Why? It is essential to cure disease when it happens; a failure to prevent disease adequately means that the health service will be swamped. Many people treated in hospitals only get ill again because the cause of their illness — poverty, stress and pollution — was not dealt with.

The government’s plan to promote private health care will not solve the problem. It may lower the demand on the NHS by transferring some of the health care for some illnesses to the private sector but, because the private medical services use some NHS facilities, those who cannot afford private treatment will be moved further back in the queue. Tories argue that the NHS can be run down in order to give people a tax cut so that they will be able to afford private medical insurance. Ignoring the fallacies about workers paying taxes which this argument rests on, even if it were correct the result would be chaotic. A person who really needs to be insured, because s/he gets sick rather easily, would find it very difficult to insure him/herself at a price that s/he can afford. There is also a limit to how much treatment one can be insured for at a given price. Most people would not be able to insure themselves so that they would get the same range of services from the private sector that they would get from the NHS.
Increasing efficiency through a tough management for the NHS will not solve the problem either. The NHS is already very efficient. It had to be because it was swamped from the moment it was set up. The savings made will not amount to very much. The most likely result of this policy will be to prepare the NHS for privatisation.

The NHS functions the way it does because it exists to provide employers with as healthy a workforce as possible to recruit from. At a time when the number of people waiting for work is greater than the number of jobs for them, preventing disease on a large scale is not cost-effective, because if a worker gets ill a person without a job can replace the sick worker. However, it is not in the interest of employers to have disease run uncontrolled; exerting control is what the NHS does, so that the number of workers available for work does not fall too low. This role may not have been envisaged by some of the reformers who wanted the NHS set up. But the system we live under forces everything to conform to the needs of profit. The reformers promised a health service that would satisfy the health needs of everyone. Instead, we got a health service designed to serve the need of the employer class for a healthy workforce.

The health services, public or private, are owned and controlled by the employer class and so it is their interests that are served. When the wealth of the world is owned and democratically controlled by everyone, the wealth of the world will be used to serve everyone’s interests. The health service will be able to offer the best care, because medical supplies will be produced for use. and not for exchange at a profit. When food is produced to feed people, then infant mortality will fall, because mothers will have enough to eat. When life is no longer a stressful obstacle-course but a daily satisfaction of needs to create and consume, the number of people dying of heart disease and suicide will fall. When we look after our environment properly. because unprofitability will no longer have any meaning, cancers caused by pollution will fall.

If we want a problem to be solved, we must not leave it to leaders to put things right. The wage and salary earners of the world are the most powerful class. Without them, not a single hospital can be built, staffed, maintained or supplied. The time is long overdue for this class to democratically take control of the world’s resources, and to use them for everyone’s benefit.