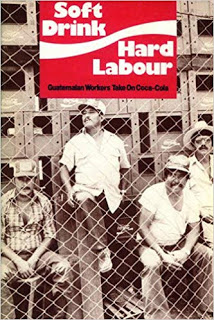 Guatemala is a country of violent repression. According to a British Parliamentary Delegation who visited the country in 1984 as many as 100,000 people had been killed and 38,000 had disappeared in the previous thirty years. Guatemala is also a country of poverty in which 63 per cent of the population live below the official poverty line and in which 2 per cent of the population own 65 per cent of the land. Against this background the study examines the industrial dispute that took place over a nine-year period involving Coca Cola workers and their union STEGAC and the owners of the Coca Cola bottling plant in Guatemala City.

Coca Cola does not directly own or manage local companies but allows franchise contracts to bottlers. In this particular case it was Embotelladora Guatemalteca SA (EGSA), owned originally by a Texan family, the Flemings of Houston. In 1975 the workers in the company attempted to re-establish a trade union which had been crushed after the military coup of 1954. The process is complex and involves legal registration of a union followed by recognition and granting of bargaining rights by an employer The factory manager, John C. Trotter, attempted various tactics to stop the union, including physical violence and intimidation. He hired members of the Mobile Military Police to act as armed guards, based on a fixed charge per day per guard payable to the army:

EGSA managers began to make explicit threats to Coke workers active in the union. On 10 February 1977 the personnel manager threatened Angel Villeda and Oscar Humberto Sarti. On 1 March, both were shot and wounded. The following day. the Coke workers’ lawyers, the Torres, were seriously injured when their car was deliberately bumped and forced off the road by a jeep driven by a government employee, (p.8)

Worse was to follow. Manual López Balam, STEGAC General Secretary, was killed by a group armed with knives and iron bars while he was delivering crates of Coca Cola. The 16-year-old daughter of a union lawyer was arrested, beaten, raped, tortured and temporarily blinded. Further workers and union officials were killed or disappeared or were violently assaulted, as in the case of Amulfo Gómez Segura whose lips were slashed with a razor, his tongue cut out and placed in his shirt pocket.

Pressure was put on Coca Cola including that by the Interfaith Centre for Corporate Responsibility, a group of shareholders from churches and religious orders. They were responsible for bringing Israel Márquez, a STEGAC General Secretary, to Coca Cola’s AGM in 1979. It was Márquez who coined the phrase “in Guatemala, Coca Cola is a name for murder”. There was also pressure from the Geneva based International Union of Food and Allied Workers’ Associations (IUF). Coca Cola denied responsibility, maintaining that franchisees were independent operators. Nonetheless cooperation between Coca Cola and the licence holders was seen to constitute complicity. The IUF called on its affiliates to put pressure on Coca Cola which controls 44 per cent of the world’s soft drinks sales. The effect of that pressure was to give bad publicity to the image of Coca Cola and it was this to which the company responded. The EGSA franchise was transferred to new owners and a new management team was brought in. The backlash for Coca Cola was that they were increasingly criticised by the business world for allowing “the dangerous precedent of multinational trade union intervention (the IUF) in multinational corporation affairs”.

Meanwhile the new management at EGSA were gradually undermining the company, a policy which could not have gone unnoticed by Coca Cola as they held overall financial control. Under threatened closure the workers occupied the factory in February 1984. A new policy was adopted to deal with the dispute. Further bloodshed would have looked bad for Coca Cola who were that year major sponsors of the Olympic Games. The Government of General Mejia Victores was looking for foreign aid and loans and was promising elections for a Constituent Assembly so again bad publicity was not desired. The occupation of EGSA is a testimony to working-class self-organisation. There were some unusual elements. There is the ironic detail, quoted from Jim Wilson of the IUF. that “every day a sympathetic priest comes in from the outside to say mass before a makeshift altar surrounded by high stacks of Coca Cola crates”. Yet the ability to maintain that occupation for a year in a land of poverty and violent repression cannot be underestimated. Nor should the ability to withstand the economic pressure brought to bear by EGSA/Coca Cola. Again there was multinational trade union support for the Guatemalan workers and finally Coca Cola re-negotiated with STEGAC, although insisting that the IUF must not be involved in any settlement.

There are lessons to be learned from this study. A multinational corporation was pressurised into allowing a victory, although limited, to the Guatemalan workers. The occupation testified to the resilience and persistence of a group of workers in establishing and maintaining a trade union against awesome odds. The discipline of those workers during the occupation ensured a majority support and a willingness to sustain the daily routine of maintenance, cleaning, guard duty, assemblies and education and leisure activity. Yet we ought not to forget that no victory guarantees the future while capitalism is maintained. Guatemala may have an elected government but the military bureaucracy still exists. With more than 50 per cent of Guatemala’s workforce without permanent employment many fear that contact with a trade union can only take place at the expense of employment. It may be that the security forces are also biding their time. In the struggle for reforms it is the effects that are tackled and not their causes.