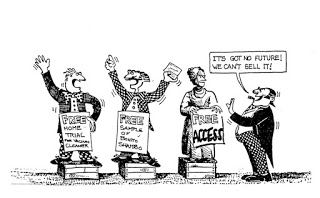 The sheer scale of advertising is intended to create the impression of an abundance and is aimed at convincing workers—as consumers—that organised, orderly buying and selling is the only method available for distributing products on a fair and equal basis. Advertising, as an industry, is not just in the business of purely selling commodities for it also specialises in reinforcing the values and dominant ideas of class society. But although the myth makers are ultimately involved in conditioning us to accept and conform to the market and exchange relationships of the wages system they must first establish a common identity of interests between buyer and seller. The advertising moguls persist in aiming for the unattainable, for they only survive by portraying an idealised world in which everybody can obtain an extra large slice of the wealth which the workers alone produce —but somehow always mysteriously evades them.
But no matter what form the images may take, the reality of everyday life unequivocally states that capitalism only operates under the economic restrictions of artificial scarcity, and consequently an abundance for all is an illusion. Accordingly the advertising world are deceiving themselves and us, for their portrayal of working class life styles rarely correspond to the reality of poverty. Obviously such a false projection can only be maintained on condition that it contains some element of truth. And undoubtedly a few of the members of the working class do, from time to time, manage to gain entrance to the capitalist class — the reverse is also true for sometimes a few of their members are chucked out to join the rest of us. By its very nature capitalism can only accommodate a certain number of parasites, and it is just not possible for everyone to become blood-suckers, or the blood bank of exploited labour would soon run dry.
Marketing and advertising agencies have become more sophisticated in the use of persuasion techniques, employing psychologists, statisticians, market researchers and con-merchants. The psychologists concentrate on colour and perception, manipulating us with their images. The statisticians must ensure a particular product is aligned with the varied consumer demands of the market. The market researchers, on the other hand, are concerned with packaging and polishing by separating workers into convenient compartments where our likes and dislikes, plus our ability to pay for the necessities of life, are duly listed. The con-merchant’s job is the hardest of the lot for they are the ones who think going to work on an egg, or eating a “Mars a day” will not only make you work harder but make you happier in the bargain as well. This sophistication and the grading of workers into different economic categories, with each distinct entity holding its own supposedly unique set of values, explains why Tesco doesn’t advertise in The Sunday Times colour supplement and Country Life.
Depending on whether or not you receive the messages of class society via the Ideal Home Exhibition or the local street market so you will find the working class is being fed a different image of its class position. Put simply: the advertising world wish the working class confined to stereotype groupings where the differences in sex. roles and occupations all conform to whatever profit maximisation demands. Sales will fall if the commercials say to their stereotype house wives they are irresponsible, unhealthy and disorganised by not using Fairy Liquid. But this is exactly what such adverts suggest by directly implying that “every Fairy Liquid housewife” is responsible, healthy and organised.
To envisage capitalism simply as a system purely concerned with the buying and selling of commodities without taking into account the effects it has on our lifestyle and how we conduct our day to day living is dangerous and damaging to us mentally and physically, for by necessity the system itself needs the workers as a class to remain docile and passive and subsequently a subject class ever ready to internalise and create false impressions of themselves and how the profit system exploits their ignorance. Because the majority of workers are disinclined to enquire into the nature of their subjection they see no conflict of interest between the exploiters and exploited and consequently fail to detect they are being conditioned into believing that there is no alternative to capitalism. There is a way out of the mindless treadmill — even capitalism can’t put a price tag on socialism — for socialists don’t sell their ideas. We give them away free of charge at every propaganda meeting. Besides which socialists have found by long experience it is sufficient to advertise the realities of capitalism rather than indulge in crude propaganda methods of deception, manipulation and distortion. Indeed the conscious political action needed to obtain socialism is not for sale precisely because its emergence will depend on the majority realising that only a fundamental change in how society produces and distributes wealth will put an end to buying and selling, prices, profits, wages, markets and poverty.
Gravedigger