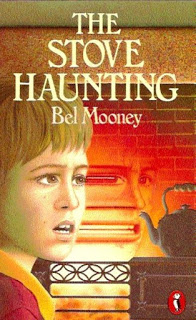 The Stove Haunting. Bel Mooney (Methuen, price £6.95).
Bel Mooney is a journalist, and The Stove Haunting is her second novel written for children It is what is known as “time-slip fiction”: an 11 -year-old boy from the twentieth century finds himself, through the medium of an old kitchen stove, entering the mind and body of an eleven-year-old kitchen boy of the nineteenth.
“The year.” says the blurb, “is 1835, and the countryside is in a state of unrest; through his friend George. Daniel becomes involved in the plans of the local farm workers to improve their miserable wages by forming a Friendly Society — a union. But the laws forbid such ‘treason’ and soon Daniel must try to save his friends from the most terrifying fate of all.”
Judged from the purely literary viewpoint, the book is competent without ever really rising above an acceptable level of mediocrity. Judged from the social viewpoint, it presents its story of deprivation and injustice vividly enough; but “absorbing insight”, as claimed in the blurb? It is not impossible, even in a children’s book, to lead one’s readers towards an understanding of how deprivation and injustice come about towards an understanding of how society functions. This book makes no attempt to do that.
It is all too easy, too superficially attractive, to conjure up the miseries of the past — to arouse the young readers’ compassion for the poor and ill-treated, their wrath at the unfairness of “those times But the “unfairness” of those times is still with us. whereas all too often (not always: the children’s book world is changing) the impression is given that these wrongs have been righted, that we no longer have the rich and powerful, the masters, the rulers, controlling the lives of the rest of us, the masses.
In 1835 the workers were fighting to establish the right to form unions: in 1986. as far as the child reading the book is concerned, this is a battle which has long since been won. A wrong has been righted and there is an end of it. But of course, in essence, nothing has changed: the relationship between the rulers and the ruled remains as it ever was save that now. terrifyingly, with the rapid advance of technology, those in command have even more power over the rest of us than they had before; and at the same time as they have more control over us. the people, they have less control over the things the bombs, the nuclear reactors, the chemicals — which technology has created and which threaten us all.
It has now become essential that we mature sufficiently to organise ourselves on a co-operative and democratic — socialist — basis, world-wide, before the precipitous onward rush of technology, with this competitive, power-structured society, fatally outstrips us. And in this regard, any writer for children who chooses to illustrate the social wrongs of the past without linking them to those of the present is falling down badly on a common duty to humanity.
I don’t doubt that children will enjoy The Stove Haunting — will empathise with the downtrodden poor, wax indignant at the wicked rich; but they will almost certainly be left with the comfortable feeling that “it is not like that now”. And never at any point will they be induced to question the present structure of society or consider the urgent, desperate, need for radical change in the way we organise ourselves.
John Usher