Richard Lapper. Honduras: State for Sale. Latin American Bureau (London. 1985)
Honduras is the archetypal “Banana Republic” according to the author of this 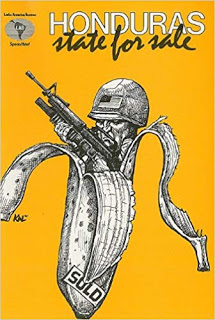 study. Its history can be seen as a series of colonial, political and economic domination from elsewhere and internally the country has been prey to various corrupt administrations. It was a Spanish colony until 1821 when it became politically independent but economically dependent on British financial investment. That British influence waned throughout the nineteenth century as America became increasingly dominant. The Honduran authorities believed that foreign investment would increasingly reap benefits to the whole country but it was Standard Fruit, the Cuyamel Fruit Company and United Fruit who became the dominant forces. By 1918 75 per cent of banana lands were owned by these three companies. Their attitude is epitomised by a letter from H.V. Rolston of United Fruit to his lawyer in 1920 where he laid out his plan for Honduras. This included the need to:

take possession of as much state-owned and private land as possible, and acquire as much wealth as we have the capacity and power to absorb . . . secure every possibility of exploiting new areas of operations . . . draw up such irreversible contracts that nobody can compete with us, not even in the distant future . . .
secure concessions, privileges and exemptions from tariffs and custom duties . . . free ourselves from all public taxes and all those obligations and responsibilities which reduce our earnings
make it our concern that the privileged class, whom we will need for our exclusive benefit, bend itself to our will. (Quoted p.23)

In this environment the only notion of a state was represented by the companies and their plantations. The success of their operations ensured that internal politics could not be distinguished from the activities of the fruit companies. It was United Fruit who finally emerged as the dominant force after 1929 and this brought an end to the company-backed civil wars that affected Honduras during the 1920s. The banana companies reaped profit of some US $412.5m between 1925 and 1950 and it is estimated that through tax exemptions alone the government lost 50 per cent of its potential revenue.
With increased industrialisation came a rise in working-class trade union activity. But like so much of Honduran life, this activity was influenced by American involvement. In particular ORIT (the Inter-American Regional Organisation of Labour) and AIFLD (the American Institute for Free Labour Development) began to train union leaders into an “anti-communist” pro-American view of the world. At the same time USAID pumped large amounts of money into a number of unions including STRATERCO. the United Fruit Workers’ Union. AIFLD is funded by Washington and American corporations (including United Fruit) while ORIT works closely with the State Department.
Politically the military has been the dominant force within Honduras since the mid-1950s. As the author points out, the Honduran elite have been weak because their “political and economic power had been historically eclipsed by the US multinationals” (p.42). The army too has been in close relationship with America since a treaty of 1954. America takes raw materials and semi-processed goods from Honduras in return for military schools, scholarships and military equipment. In 1957 the army had written into the constitution a clause allowing them to disregard presidential orders which it considered unconstitutional and in 1963 the army seized political control. The country has been largely ruled by corrupt military leaders since that time.
By 1980 68 per cent of rural households had insufficient income to cover basic consumption while 10 per cent of the population received 50 per cent of the national income. Five per cent of the population owned more than 50 per cent of the land and seven multinationals controlled 80 per cent of the economy. As part of America’s backyard Honduras has increasingly become what the author describes as a “Pentagon Republic” and it is this military dependence that dominates Honduran life throughout the 1980s. Honduras was seen as an ally in combating change in Central America particularly after the Nicaraguan revolution of 1979. Under American pressure elections took place in April 1980 although that has not relaxed the military control of political life in the country. The Honduras/Nicaragua frontier has been described by Ronald Reagan as the “fourth border of the United States” (quoted p.74). Aid has been primarily economic from USAID but also aid for International Military Education and Training. For the Reagan administration Central America represents the battleground between East and West. Honduras is seen as a buffer against the FMLN in El Salvador but it is also a “springboard for the destabilisation of Nicaragua through a US-financed counter-revolutionary force and a base for US military operations in the region” (p.82). Since 1983 US troops in Honduras have numbered 700-800 but have at times increased to several thousand including, in May 1984, a series of naval and land exercises involving some 33.000 troops. This was followed by Big Pine III from February to May 1985. The function of the operation was not only to intimidate the Sandinistas but to prepare for possible invasion. The effect of these operations has been the upgrading of three airports, the construction of ten military bases, the establishment of two radar stations, a military hospital, new roads, communications centres and port facilities. The Honduran government maintained minimal control of American personnel. By mid-1985 it is estimated that at least 11.000 American military personnel were permanently stationed in the country. The study records that:

Honduras’ strategic value remained the priority for the Reagan administration, and not its desperate poverty, (p. 118).

This is capitalism at its most cynical. In 1985 health and education represented seven per cent of the national budget whilst military spending accounted for 30 per cent of total expenditure. In 1984 the Ministry of Health reported the closure of 210 out of 362 of its rural health centres because of lack of medicines, equipment and personnel. Priority is not the fulfilment of human needs but the military and political aspirations of the dominant American economic unit. Honduras is accustomed to this manipulation in terms of its economy, politics and trade union organistions. It epitomises the subjugation of individual nations by dominant economic interests. The people of Honduras have been exploited to satisfy the economic fulfilment of a minority and Honduras as a nation has been exploited for the political and military aspirations of a dominant economy concerned solely for its own self-perpetuation, whatever the level of poverty of the indigenous population. This is a typical manifestation of capitalism. Honduras is the unacceptable interface between East and West. Its domination by America economically, politically, militarily and socially has done little to relieve Honduran poverty. In the propaganda war between the conflicting capitalist interests striving for domination in Central America Honduras is a casualty obscured by the high tech sophistication of the American military machine
Philip Bentley