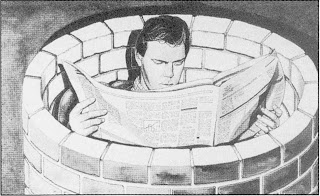 Not for the first time The Times newspaper is at the centre of a bitter industrial dispute. In November 1978 Lord Thomson, then owner of the paper, decided that he was no longer willing to run it at a loss. He demanded from the unions agreement to accept new printing technology, the elimination of “unofficial” strikes and a big reduction of staff. Failing to get agreement he locked out the workers and The Times was off the streets for nearly a year. When work was resumed it was on terms far short of what Thomson wanted and two years later he pulled out and sold to Rupert Murdoch. In January 1986 Murdoch took the printing of his papers, The Times, Sunday Times, Sun and News of the World out of Fleet Street to his new plants at Wapping and Glasgow.

At Wapping printing is being carried on by 500 workers belonging to the electrical workers’ union and the print unions, in place of the former 5,000 members of the print unions, all of whom were sacked when they came out on strike. Murdoch admitted that the changes had not been fully effective. There was a fall in the number of copies printed and considerable difficulty arose over distribution, in spite of the fact that in London it was taken over by a new fleet of vans. Murdoch said he was confident that all the difficulties would be overcome in a few weeks. Print union officials said it was only the beginning of a struggle which could go on for months.

Much had happened since 1978 to change the position of the unions and the management, including the building of the Wapping plant at a cost of £100 million of which £7 million was spent on American computer equipment. The law governing strikes and picketing had been tightened by the Thatcher government, and the print unions had already been defeated in their resistance to the use of the new technology by Eddy Shah, who is publishing a new paper in March without employing members of those unions. Conflict with the law in that battle had already cost the National Graphical Association heavily. The Financial Times (27 December 1985) estimated that the cost, including further court claims still pending, may reach £2.000,000.

A similar struggle over new technology was going on at the same time between the print unions and other newspaper proprietors including Robert Maxwell, owner of the Mirror group of papers. That dispute was settled by agreement with the unions, which led Maxwell to say rude things in the Mirror (27 January) about his rival. Whereas, said Maxwell, he had followed ‘The British Way” of negotiating with the unions. Rupert Murdoch, importing brutal tactics from Australia and America, “prefers to destroy them”. Lest it be thought that “The British Way” differs essentially in its purpose from the Murdoch way. it should be noted that the Mirror has also got rid of 2.000 printers, “most by early retirement or voluntary redundancy”.

At the time of writing it is not possible to know with certainty what will be the outcome of the dispute but the prospects for the unions look extremely bleak. They were counting on the help of the TUC and other unions, but already most of the journalists, though against the instructions of their own union, have accepted Murdoch’s terms. The printers are hoping that the Transport and General Workers’ Union will succeed in blacking the distribution of Murdoch s papers and that the TUC will condemn and possibly expel the Electrical Workers’ Union, which however shows no sign at present of obeying TUC instructions. Many transport workers too, are ignoring the instructions of their union not to carry Murdoch’s papers.

Basically what the struggle is all about is the ceaseless development of new techniques as a feature of capitalism in the search for cheaper methods of production. The capitalists who adopt the new and cheaper methods capture the market. Those who fail to do so go out of business, as has happened with several newspapers and threatens others. There have been many such developments in the history of printing: from the hand compositor setting individual letters, to the keyboard monotype and linotype and latterly to the new system which enables journalists to print the final product without the involvement of compositors. The writing on the wall for the London newspapers is the claim by Eddy Shah that he will be able to sell his newspapers at less than half the price of existing papers. The whole newspaper industry has to adopt the new technology or face bankruptcy, because the advertisers’ money will flow to the cheaper journals.

Workers in every occupation have always been affected by this aspect of capitalism. The railways almost destroyed the canal companies and horse transport, only to be hit themselves by motor and air transport. Sailing ships were replaced by coal fired steamships and then by oil burning ships. The inland telegraph service has gone. There has been an enormous reduction in the numbers of coal miners and farm workers. Along with having to meet competition from oil, gas and nuclear power the coal industry has seen a change which replaces men in the pits by workers in other industries. Before the newly opened Selby pit produced a single ton of coal, £1,000 million had been spent on new coal cutting machines and other appliances. In agriculture the old. nearly self-sufficient farms have been replaced by those dependent on a vast input of fertilisers, weed-killers and pesticides from the chemical industry. Jobs on farms have been replaced by jobs in the chemical industry.

The trade unions, in seeking to protect their members’ jobs, have had to make a hard choice. They can hope to delay the introduction of the new techniques and can often do so, as have the Fleet Street printers, but at the end of the road they either have to negotiate a reduction of jobs, as on Maxwell’s Mirror, or risk losing all the jobs as on Murdoch’s Times group of papers.

The stock argument of capitalist economists has always been that workers should not resist the new techniques but welcome them on the ground that if the price of the product is reduced its market will expand and there will be more, not fewer, jobs. In a limited way this is sometimes true. Following the publication of the Daily Mail in 1896. and other cheaper papers with wider circulations the numbers of workers employed in the printing and paper trades continued to increase. And it is reported from America (Sunday Times 19 January) that a similar development has taken place there, following the use of new technology.

The new technology revolution in American newspapers has brought increased circulations. a wider range of publications, and an increase in newspaper jobs — in spite of reduced manning in the composing rooms.

The increase of other jobs is of course no cause for gratification to the compositors whose jobs have gone. In general, technical developments hit hardest at older workers, unable to adapt to the new requirements.

And the argument of the capitalist economists ignores the fact that not only is capitalism always creating some unemployment but periodically it rises to peak levels, as at present and the parties of capitalism can do absolutely nothing to prevent it.