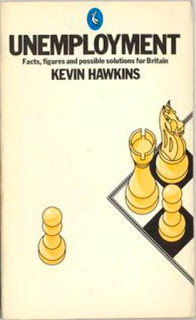 Unemployment by Kevin Hawkins (Penguin. 1984)
It may be one of life’s sick jokes to explain to the unemployed why unemployment exists; and to show how one form of poverty can more effectively be replaced by another. Hawkins begins his work by dismissing some of the myths as to why there is unemployment. It does not occur as a result of “the provision of generous welfare payments nor any other such diversionary nonsense” (p. 5). He points out that labour shortages can exist alongside unemployment. This is not because generous welfare payments make the unemployed too clumsy but often because there is a mismatch between the skills of the unemployed and the requirements of labour. Similarly. the existence of “scroungers” does not explain current high levels of unemployment. This myth can be exploded by examination of the levels of benefit which are supposedly being “scrounged”. Between 1971 and 1980, levels of unemployment benefit “fell from 70 per cent to 46 per cent . . .  of average earnings” (p. 26). Without earnings related supplement the figure dropped from 45 per cent to 33 per cent of average earnings.
Hawkins, as Director of the West Midlands CBI, views the problem of unemployment from the standpoint of the industrialist. He talks of the necessary “professional approach to the use of resources, especially manpower” (p. 78) that has arisen out of the current recession. Manpower is simply a resource that must be manipulated for the prime good of a social ethos whose only consideration is profit and “efficiency”.
Hawkins accepts unemployment as a prominent feature of British society for the rest of the decade. This may seem to offer little comfort to the long-term unemployed but he does suggest some measures which he believes will alleviate the problem. He claims that his strategy to reduce unemployment is based on principles that are “humanitarian, economic and political in character” (p. 107), yet the humanitarian approach takes a nose dive two pages later when we are told that the rationale must be assessed “not by their effect on the unemployment figures but by the contribution they make towards improving the supply-side performance of the economy” (p. 109).
Hawkins’ plan for the future lies in reducing business costs not generated by market forces, and by these he means taxes on employment. He argues that government must stimulate employment in roads and railways and that it should cease subsidising specific firms and increase the supply of highly-skilled manpower. His big plan for the future is to reduce the costs of labour — the main ingredient in this economic soup. He argues that wage costs must be adjusted to the current level, a sufficiently vague phrase which he explains “in more common language, until workers ‘price themselves back into jobs’” (p. 115). This is the old old story of when in doubt blame the workers. We are expected to accept the old adage of what is good for industry is good for the people.
Hawkins calls for an immediate wage freeze that will shock workers into a new sense of realism and keep them in their place. His alternative strategy is to further weaken the power of the unions, presumably to enable industry to dictate all conditions of service and levels of pay. He also advocates the subsidising of employment by central government and applauds the Community Programme Scheme. It is interesting to note the extent to which the humanitarian approach has given way to economic and political considerations when he says:

It has also been argued that the financial incentive to apply for a CPS place is inadequate insofar as the average wage of £60 a week on the scheme is less than the benefit income which a married man with several children can draw. Rather than increase the average wage to take it above the benefit ceiling, thereby increasing the gross cost of the scheme, the remedy may well be to expand the number of places available at the current wage and simultaneously reduce the benefit income. (P 124)

This is allied to such schemes as job-sharing in which the wage is split between two persons, supposedly to ensure a statistical reduction in unemployment but more realistically a statistical increase in poverty. To ensure that even this does not burden the employer by increased paperwork it is suggested that a grant be made available to implement the scheme. Hawkins recognises that his policies may well increase inequalities and social division but “no apology is made on this account”, for he has already explained that he is concerned with “the importance of wealth-creation, as distinct from wealth-distribution” (p. 132). In this the book reads like some latter-day Capitalist Manifesto. The working class are punished for the inefficiencies of capitalism and its inability to satisfy the needs of society’s members. To cling in desperation to such a system seems absurd. To justify that system by a more systematic exploitation of the working class is contemptible.
Philip Bentley