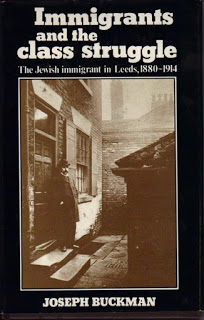 This excellent and readable book examines the economic and social life of the Jewish immigrant community in Leeds between 1880 and 1914. The community comprised refugees from Russia and other parts of Europe, who were to provide a cheap and pliable source of labour for the tailoring and slippermaking trade in Leeds and elsewhere. By the use of Yiddish sources and untapped statistical material such as factory reports, a vivid picture emerges of the social and economic relations in the Jewish community over this period.

The author argues that far from being one happy family, the Jewish immigrant community developed class antagonisms resulting from the capitalist mode of production. Buckman is highly critical of the commonly held view that the growth of the Leeds factory system in the tailoring industry led to progressive improvements for the workers. The alien tailoring trade was subordinate to the indigenous factory system, which was to undergo deskilling, division of labour and cheapening of products. Under such conditions and with for the most part a hostile host society, it was to take 35 years of struggle — until January 1912 — before they achieved a reduction in their working day to nine hours. In the tailoring trade socialists, anarchists and progressive trade unionists made some real gains in workers’ organisation but the slipper trade over this period was a different story.

The forces driving wage labour against capital in a relentless competition for profits involved the intensification of working conditions in doomed pre-industrial type of manufacture. Despite valiant attempts to organise workers in the slipper trade in Leeds between 1896 and 1903, the wages had fallen by 50 per cent and a horrific 18 hour day was commonplace. Faced with the hopeless task of struggling against the machine, the Jewish workers replaced the host workers and eventually slippermaking in Leeds declined.

This book shows that capitalism is synonymous with suffering and misery. However, the class which does all the useful work in society has the power to organise for their own emancipation and put an end to sweat shops and the other misery of the wages system once and for all.