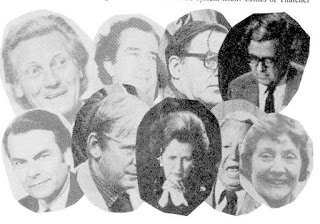 One of the important pre-requisites for a major political figure is a personality distinctively different from any other politician. Yet all potential leaders must have one thing in common — they must conform to the current interests and values of the ruling class. In the past the bogies of Hitler and Stalin were helpful; in their day they were accepted by workers as essential to the running of society.

Naturally, for capitalists the successful personality reflects the “instinctive” ambitious drive for competition among individuals. All potential candidates in the personality stakes find it beneficial and essential to project the image of being a captain of industry or the right politician or the good union leader. To be successful, candidates must ensure that the selection process carefully irons out all the unacceptable personality traits and enhances all fashionable characteristics. For example, it would be out of character if Shirley Williams’ hair did not look like yesterday’s mop, and her intellectual image would look as worn out as her clothes if she failed to deliver a new set of proposals at every re-launch of the Alliance. Thatcher, on the other hand, realises that her image rests on concealing the blemishes.

Such role playing requires that participants — politicians in particular — are capable of adjusting to the specific image determined by the changing circumstances of the political arena. The constant changes forced on these personalities have in turn made them a good customer of the image makers, as the joint partnership between Saatchi and Saatchi and Thatcher well illustrated. Success has become measurable, by judging the response of working class ignorance to the performance given by the politician. When Margaret Thatcher is asked the usual loaded question by the media — why she took the decision to reduce pensions or benefits, she will do her utmost to ensure that her own personal style of response will induce a million or so tears and sighs of sympathy from members of the working class. She tries to convince them that such harsh methods were necessary to guarantee long term gains, the ploy being: what is good for capitalism is good for you. Thatcher’s TV appearance would be a non-event unless her own personal hair-dresser was in attendance to ensure that no misplaced hair distorts her image of purity and righteousness in any way.

When Thatcher is faced with striking workers it takes no more than a slight change in her tone of voice, and an affronted expression on her face to satisfy the media. Like all character actors in the personality stakes she realises that such attempts to discredit her and her policies of protecting capitalists’ interests only makes her more eligible for the title of top cat, for all political personalities feed off each others’ liabilities and disabilities.

Leading contenders among those who are out to discredit Thatcher’s image are sometimes known as champions of the working class. This simply means they have taken great care to stamp themselves with the correct branding iron. In the process they also take great care that Thatcher is labelled poisonous for working class consumption. For radicals like Benn and Scargill she represents the destroyer of British Industry. They also find it beneficial, to their own image making, to emphasise the “Iron Lady” aspects of Thatcherism. All such catchphrases are easily acceptable to those who find it more convenient to blame the individual for capitalism’s ills rather than the system itself. Critics of Thatcher like Benn and Scargill have become foremost experts in highlighting the “conspiracy of the media” which in return is out to mould its own brand of personality onto them. Yet without the media, neither Benn nor Scargill would possess the image of champions of the working class. It is a well known ploy within political circles that one of the best ways of getting media coverage is to attack the media for the way it represents you. To the uninitiated such double think has a certain plausibility; after all, Benn and Scargill are so obviously anti-establishment.

However, all this play acting must be confusing to those members of the working class who follow the personality stakes. It must make it very difficult to tell the difference between the next lot of good and bad guys and gals, whom they wish to place on the pedestal of hero worship. Just imagine how confusing it must be for the experts on personality on the left wing when their left- wing heroes of yesteryear become the centre-right heroes of the status-quo.

Out of the necessity to gain the workers’ overall support and to cater for individual workers’ preferences and phobias, politicians are presented as a particular ideal type. Every election is a confirmation that capitalism, despite its defects and outdated social and productive relationships, only survives because of working class support. What is not widely discussed is the reason for a fundamental contradiction in interests. On the one hand there is the majority who suffer, as a class, the consequences of poverty, homelessness, unemployment, conflict, and human misery. On the other there is a minority who profit, as a class, from these social problems. Yet the majority see no contradiction in this state of affairs and, indeed, regularly supply and provide the means for the minority to live in luxury. Clearly, the working class view of the world is distorted, both by them and for them.

Before capitalism’s image-makers can fulfil their role, and in order for them to perpetuate the process, certain conditions must prevail. They thrive on plausibility and promises, depend on a degree of gullibility and ignorance, and literally profit from a poverty of knowledge. Without these pre-conditions no image-making industry would be able to mould the working class into passive and docile individuals. Neil Kinnock, for instance, keeps the Labour party in the public limelight by painting a far rosier picture than Thatcher of a future period of prosperity. From our present experiences and past circumstances, we know there have been periods when trade has increased and unemployment decreased. Therefore, like night follows day. we know any talk on future periods of prosperity are not only plausible and a promise but a virtual guarantee. But this does not tell us what will be the main consequences of such a state of affairs: firstly, it will be a period of prosperity for capitalists; secondly, it will be followed by a period when trade will decrease and unemployment will increase.

Of course, even the most inexperienced Public Relations Officer knows that plausibility and promises are inadequate to convince people. After all, promises need constant renewal. What better attraction to capture a person’s attention than another one dressed up in the image of a leading politician? At a stroke, plausibility is retained and in addition the human interest angle is provided with a more feasible object against which to register discontent. Political figures therefore serve as a distancing mechanism between the system itself and the working class. The non-solution of problems is presented as a fault in the make-up of the personality, whereas in reality social problems demand a social solution.