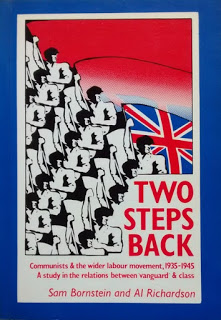 Do we really need yet another catalogue of the crimes and corruption of the Communist Party of Great Britain during the last war? Is it not well known that there was no filthy trick in the book to which Pollitt, Campbell, Emile Burns, Bill Rust et al did not stoop to justify their existence to their Russian paymasters? Strike breaking, organising shop floor espionage to report and name “agitators”, opposing Labour candidates like Brockway in Cardiff, and calling on workers to support the Tory Minister of War, James Grigg. supporting Bevin’s Act to imprison slacking munitions workers, denouncing those workers for slacking on the night shift. Small wonder that the very name Communist Party stinks in the nostrils.

But is there any evidence that the authors have learned anything from this venal and criminal enterprise? The writers show no appreciation whatsoever for the facts of the case. Like true Trotskyists, they are Vanguardists. Pollitt and Campbell may have been scoundrels, but if only the right leaders (Tearse, Haston & Co) had been in charge, all would have been well! They do not understand that the Russian Revolution could not be a socialist one. They write in the foreword that political reformist activity in Parliament is simply the political equivalent of the struggle for higher wages. This is moonshine. The parliamentary action of the Labour Party is the negation of the struggle for higher wages. It is in fact a struggle for lower wages. In spite of everything — the Labour Party in decline, the SDP formed and the Tories still winning elections — they still spout the Leninist claptrap that the Labour Party is the “Party of the Working Class”. They have a pathetic belief in the existence of so-called professional classes, writing that the working class cannot come to power unless it draws behind it other support, “including sections of the middle and professional classes and the intelligentsia”, whatever that may be. A good illustration of how reading Trotsky can affect you.

They refer to “Marxism” without any idea of what it really is, quoting from the Communist Manifesto that “Communists had no separate interests from the interests of the proletariat in general”, oblivious of the fact that this was written for Germany in 1847.

Jock Haston who, we understand, has retired from politics (like so many disillusioned Trotskyists) and now affects a cynical contempt for their wartime activities, had all this explained carefully to him in a debate before one thousand workers in the Woodside Halls in Glasgow in 1943. He was told that there was not a “Workers Government” in Russia. That the Labour Party was not “the Party of the Working Class”. That what makes a working class party is socialist principles, not trade union expediency, and that Trotskyism, like Leninism and the Communist International, would evaporate. It is one thing to write history and another to learn from it.