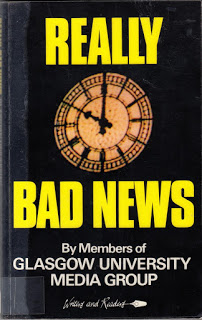 Really Bad News is the latest publication of the Glasgow University Media Group and follows on from Bad News (1976) and More Bad News (1980). The report aims to prove that the BBC and IBA are politically biased in their presentation of news and profoundly committed to a distinct social and political order:

The preferential treatment accorded to some right-wing views is only part of this. A second critical feature is the closing off of possible alternatives. Information which contradicts the preferred view or which would give credibility to the alternatives, is either rewritten, downgraded or simply left out. (Pp. 88-89)

The media are said to relay an ideology appropriate to a passive population and to foster acquiescence by limiting access to different ideas. The Glasgow Group claim that by so doing the broadcasting institutions are in contravention of their legal and conventional obligations to be balanced and impartial. A powerful case is presented to justify the claim that the media support management at the expense of shop floor workers, and analyses are made of television coverage of the British Leyland dispute of 1975, the Glasgow Corporation dustcart drivers’ strike of 1975, the treatment of inflation in 1975, and the Labour and Conservative Party conferences in October and November 1979. This is followed by an analysis of the media in a class society and suggestions for the reform of broadcasting.

The Glasgow Group argue that the broadcasting medium’s assumption is that “production in our society is normal and satisfactory unless there are problems with the workforce” (p. 76). To prove this they analyse individual broadcasts of both ITN and the BBC and conclude that the news is organised in such a way that only one set of explanations and policies is endorsed. The logic built up in their presentation “dictates the flow of information, the range of accounts and the legitimacy that is given to these” (p. 59). As far as inflation is concerned, the media assume this to be caused by wage increases and therefore endorse wage restraint. Both the BBC and IBA argue that their reportage is accurate and trustworthy and deny that they either select or distort but the evidence presented contradicts this.

The Group argue that the existing range of views within society is not presented in a balanced way. Ideas are neglected if they are not consistent with the accepted ideology or are downgraded and made to look unrealistic or idealistic. They are especially critical of the treatment of Tony Benn and the greater part of a chapter is devoted to the media’s attitude to treatment of him. There is more than a slight hint of the Group’s own bias towards Benn in this section. This is extended into an analysis of the rejection of the “left” and is linked to the media’s attitude towards the working class and trade union activity. One major aim of the report is to redress the balance on behalf of trade unions and the “left” and to pinpoint the faults of management and the organisational structure.

The Group also argue that the media are undemocratic in that only the views of people defined as “important” are taken seriously. These include senior civil servants, trade union leaders and leading politicians. They deny that they wish to replace a right-wing oligarchy with a left-wing one, and claim to want an equal opportunity for their views to be represented. At the same time they make a more profound criticism of the media when they claim that broadcasters:

may look at “isolated” abuses in the economy — it may investigate “pockets of poverty” or the effects of unemployment in a single area but not usually at the nature of the economy which produces these (p. 140).

The same is true of the Glasgow Group. They wish to reform the media but not to overthrow the system of society which has created the conflict of interests. They represent an alternative view of the economy — of capitalism — but like the media they see this as being the only valid form of society. They claim that broadcasting can be organised in such a way that there is a greater proliferation of views and policies. This will be accomplished by the “democratisation” of the media. Broadcasting is said to be too important to be left in the hands of broadcasters and must therefore be opened up to democratic participation. They propose that:

It is important to recognise the bias of the media and in this sense the work of the Glasgow University Media Group has some value. Our criticism lies in the falsity of the hope that we would have a more equitable society if all views were represented within broadcasting. The work of the socialist movement is hampered by the media; had we access to it we would not put forward false hopes and dreams for capitalism but pinpoint the failings of the system itself.