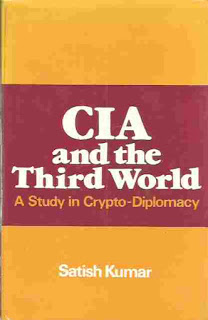 “In the Clandestine services we were ready. On the morning after the election of Eisenhower one of the senior paramilitary officers home from the SEA Supply Company in Thailand ran through the offices shouting: “Now we’ll finish off the god damned Commie bastards. We’ll get rid of the fucking pinkos in the State Department and around this place too. They’ll all be as dead as that little bald-headed son-of-a-bitch who said he thought he was going to cry last night when he had to concede to Ike.”

This scene, described in J. B. Smith’s Portrait of a Cold Warrior, is reported in Satish Kumar’s new book as summing up the atmosphere in CIA headquarters the day after Eisenhower’s victory in 1952.

But American secret service operations were in full swing well before Eisenhower came to power. By 1953 they extended to 48 countries and since then, whoever has been president, have never ceased to escalate in nature and extent. Kumar takes us through these operations in Africa, Asia and Latin America using the evidence available from various books, articles and official reports published in recent years. He has chosen the Third World countries in particular (the Congo, Angola, Laos, Vietnam, Indonesia, Chile, Guatemala, Dominican Republic) because they have been especially susceptible to “penetration” by foreign secret services owing to the relative newness and fragility of their rulers and institutions.

Subsidies, bribery, arms supplies, blackmail, assassination plots and hiring and arming of mercenaries are some of the methods described as being clandestinely used by the CIA to undermine undesirable regimes and shore up or instal favourable ones. Not, however, that such efforts have always met with success. On the contrary this book is less a catalogue of success than one of dismal failure with Cuba, Laos and Angola being prime examples. And failure for the CIA has usually meant success for its Russian counterpart, the KGB, which, as Kumar is at pains to point out, has certainly been at work with an intensity equal to the CIA but whose operations are impossible to document because of the more closed nature of Russian society.

The main point, however, is that every major CIA operation, whether a triumph or a disaster politically, has brought turmoil, misery and death to the population it has been visited on. And although this study tries to be as technical and dispassionate as possible, and not to dwell on the grisly human consequences of “covert diplomacy”, it cannot at times’ avoid giving glimpses of the horror stories behind the operational details: the “decimation” of local populations secretly recruited to help favoured regimes in Laos and Vietnam, the mass slaughter and public torture in the Congo in the early ‘60s and the “recurrent terror and repression” there ever since.

Kumar is not completely silent either on the question of why the super-powers go to enormous trouble and expense to clandestinely win foreign rulers and, if possible, populations on to their side. “Foreign policy in the ultimate analysis”, he writes, “is the extension of a country’s domestic policy . . . it is natural that foreign policy should also reflect the interests of corporate capitalism “. He goes on to quote with approval the view expressed in R. J. Barnet’s Roots of War that what a government does is to “use its power to open up investment and market opportunities, to collect bills and to regulate competition”. In other words a country’s foreign policy, whether open or covert, is directed towards the defence and capture of markets, raw materials, trade routes and the strategic positions needed to assure these. And Kumar, although frequently pointing to the cloak of “ideology” behind which the battle for control of the Third World is fought, also makes a number of telling references to the underlying economic and strategic motives (“market for US goods”, “mineral wealth”, “strategic location”, “wealthy nations”). If he had still been writing his book he might also have referred to the recent declaration by an American Embassy official in North Yemen that the US intends to do nothing to stop the present government there falling in favour of a Communist regime: “We feel that if North Yemen moves left, the Saudis will be so terrified they will move even closer to us. North Yemen has no oil. Saudi has. It’s as simple as that”. (Sunday Times, 13 December, 1981.)

Not that the author is anti-American or thinks there is anything wrong with the world being run on the basis of international economic rivalries. Indeed he agrees with R. J. Barnet that the foreign policy of American governments is a legitimate “means of enhancing the power and prosperity of the American nation”. What he is opposed to is this being done in covert underhand fashion by an agency whose crude anti-Communist mentality has at times been at cross-purposes with the interests of American capitalism and which, with its considerable independence from central government, has sometimes landed America’s rulers in the international soup. He qualifies CIA operations as “illegal” and as “violations of human rights”, and advocates traditional diplomacy conducted through ambassadors and adherence to “international law” embodied, as he sees it, in a United Nations General Assembly resolution of 1965 which declared that: “No state has the right to intervene, directly or indirectly, for any reason whatever in the internal or external affairs of any other state”.

These are extraordinarily naive solutions to offer. The author’s wide knowledge of his subject should have taught him that the economic rivalries of capitalism defy appeals to notions such as “legality”, “human rights” and the rest. These rivalries inevitably lead to conspiracies, corruption and bloody conflict. The real lesson of this book, apparently unlearned by its author, is that the need for a vast expenditure of resources, energies and lives in so-called “intelligence operations” will only disappear with the disappearance of the need for governments to seek profitable outlets on the world market for their capitalists’ goods. In other words we will have the CIA, the KGB and all their lesser brothers until we decide to get rid of the system that produces them and that needs them as tools for its normal functioning.