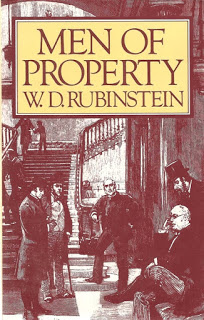 Men of Property: The Very Wealthy in Britain Since the Industrial Revolution, by W. D. Rubinstein (Croom Helm, 1981).

Who are the capitalists? Are there any left? Have they been replaced by the big impersonal corporations? These are some of the questions dealt with in Men of Property, an academic study mainly based on official probate and income tax statistics.

On the first question the author supplies detailed identifications and wealth statistics dating from the early nineteenth century. On the second and third question, while pointing to the disappearance of the old “larger-than-life millionaire”, he notes the rise of a “smaller, less exalted millionaire”, the wealthiest of which species are “possessed of fortunes whose size, in absolute and even relative terms, far exceed anything in the past”.

The exact amount of wealth owned by these individuals however, is, as Rubinstein points out, hard to assess. He mentions the Duke of Westminster’s estimated £4,000m, the Pilkington glass family’s probable £200m or so, Lord Cowdray of petroleum and engineering with about £150m, property developer Harry Hyams’ likely £50m and many more examples. The precise figures he is able to give relate to wealth actually left at death. These show that between 1970 and 1979, after tax avoidance, shipowner Sir John Ellerman left £52m, Count Antoine Edward Seilern, an Austrian with an estate in Britain, left £31m, property developer Felix D. Fenston left over £12m, landowner Thomas 10th Earl Fitzwilliam left £11½m, and six other wealth holders left £5m or more.

Finally it has to be said, for the author does not say it, that the personal fortunes discussed in this book and the power and privilege that go with them all stem from a common source—unpaid labour. The vast majority of the population—the wage and salary earners—receive as payment for their work less than the value of what they produce, the surplus going to their employer-exploiter. This is how capitalism works and why, under it, we will always have a small minority monopolising most of the wealth and the large minority—the real wealth—creators having to live as best they can on what remains.