Insults
“You’d better get up to the North East,” said the Prime Minister to Lord Hailsham. 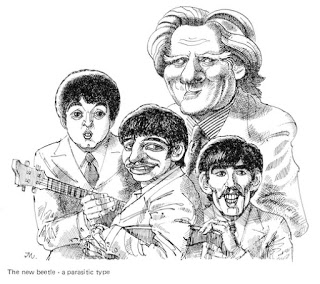 “The people up there are sound chaps really; their fathers stuck it out well at places like Passchendaele, but they’re getting restless. Something to do with bad housing, unemployment, sickness and poverty . . . Have a word with them—tell them we’re all in this together, you know the stuff. Oh yes, better get yourself a cloth cap; not the sort I wear on the grouse moors, your expenses won’t run to that. I believe there’s a shop called Montague Bolton or Marmaduke Burton or something who do them quite cheap. Good luck.”

“You’d better get up to the North West,” said the Prime Minister to Michael Heseltine. “The proles up there are misbehaving, rioting and helping themselves to property they don’t own, even if they made it all. Perhaps they’re dissatisfied about slum housing, unemployment, poverty, heavy handed police . . .  Try not to say too much though—you’re inclined to make a fool of yourself sometimes, you know. Get a few businessmen up there who’ll pretend to be surprised that people live in such conditions. Wear your best clothes and get you hair cut. Good luck.”

Since Hailsham’s fatuous insults to the working class, twenty years ago, there has been little change in the problems he was supposed to be alleviating except that if anything they have got worse. And, as Heseltine has found out, the workers’ reaction has become more violent, desperate and futile.

Yet since Hailsham’s visit the working class have had six chances, at general elections, to attack the cause of their problems. They have used those chances to elect two Labour, and two Tory, governments. This persistent support for capitalism has meant that the problems continue and worsen, and that places like Toxteth and Brixton still fester.

Little wonder, then, that cynical politicians also persist in their security, to the extent that they can so freely offer insults to working class intelligence. With support like they get, who can blame them for feeling smug?

Wets
Margaret Thatcher is said to be angry at people like Lord Thorneycroft and Peter Walker and Francis Pym who have been publicly criticising her policies and she is said to be even angrier at the press reports that she was angry in the first place. At this rate, we must ask ourselves, how long will that hairdo survive?

As a result of all this, the idea is gaining ground, that these politicians called the Wets have lit on some secret about how to run capitalism which would make life a lot easier for the working class. Some Wets are harking back to the days when it was fashionable to think that the state could spend its way out of a recession, cutting unemployment at a stroke. Leaving aside the fact that workers who are in jobs still suffer poverty, even if less acute than when they are on the dole, and the historical fact that the policies of Keynes have themselves been discredited, it must be said that the idea of politicians like these standing for a more humane capitalism is positively laughable.

Thorneycroft resigned from the Macmillan government—with Enoch Powell—in 1961 on the argument that there was not a stern enough effort to cut working class living standards. Peter Walker grew rich out of the world of fringe banks, finance houses and investment trusts, in their heyday in the sixties. He personifies the capitalist ethic that what is good is profitable, from which all abundance and happiness must flow.

Nobody should be deceived that the Tory Wets have any more to offer, as solutions to capitalism’s inability to satisfy the needs of its people, than the most arid Dry. Thatcher angry? It is the working class, who are exploited, degraded and deceived by capitalism and its spokesmen, who should be blowing their tops.

Police
We might have known it. While the smoke still rose from the riot-torn cities, a pall of parrot cries, slogans and “demands” also went up, from the left wing.

“Police accountability” was one of the these demands—on Merseyside and in Brixton where, it seems, the police are pretty good at rioting themselves—which is supposed to help prevent it all happening again.

As usual, the lefties were too frantic to stop and ask themselves some necessary questions. How far, for example, is this “accountability” to go? Is it to be taken to the extent of those American states where the top policemen are elected to their office? This theoretical safeguard has led, notoriously in the Deep South, to some notably corrupt police forces whose officers have murdered people but who did not arrest themselves because that was how the voters wanted it.

On what basis are the police supposed to be accountable to the working class? To the people they police, which means the people they repress, imprison and assault? They are employed by the other class in society—by the capitalists—to assert the privileged standing of that class and to separate the workers from the wealth they have produced.

The police are accountable to the minority who live in palaces, not to the majority who live in the slums and the semis. While the working class acquiesce in this system of deprivation, they will use any control they have over any agency in the interests of the minority, to keep that minority in their position of privilege.

All experience teaches us the folly of expecting the agencies of capitalist control to change their character, to deny their role in the class struggle, to become benign and non-repressive. The workers must aim for a basic change in society, which would make those agencies redundant.

But until that happens there are likely to be a lot more broken heads—and worse—in the cause of capitalist repression and in the left’s opportunism.