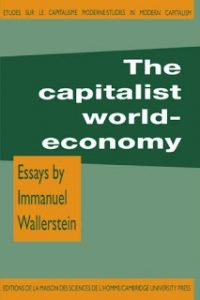 The Capitalist World-economy by I. Wallerstein, Cambridge University Press, £4.95
This book, first published in 1979, brings out well an essential feature of capitalism: it is a single world system, a single world economy. There is no such thing as the “British economy”, the “American economy” or the “Russian economy”; there is only one economy, world capitalism. What is more, capitalism has been a world-economy—embracing a number of states with varying divisions of labour—ever since its origin in Western Europe in the 16th century, even though it did not dominate the whole globe until the end of the 19th.
This view—which is one we ourselves hold—has various important implications. First, that there are no national solutions to today’s social problems. The various states into which the world is divided are political, but not social units. The state does not define the boundaries of the present social system, which is worldwide and capitalist. Since capitalism is the cause of today’s social problems and is a single world-wide social system, it clearly follows that the solution to these problems can only be a world-wide social change (from world capitalism to world socialism).
States do, however, have an important economic role to play in the capitalist world-economy: to try to distort the market for the benefit of the group of capitalists they represent. As Wallerstein puts it:

Within a world economy, the state structures function as ways for particular groups to affect and distort the functioning of the market. The stronger the state machinery, the more its ability to distort the world market in favour of the interests it represents (p.61).

It is this that explains the militarisation of the world (and, by implication, the futility of expecting disarmament while world capitalism lasts):

State machineries have interfered with the workings of the world market from the inception of capitalism. Moreover, the states have formed, developed and militarised themselves each in relation to the others, seeking thus to channel the division of surplus value. In consequence, all state structures have grown progressively stronger over time absolutely, although the relative differences between core and peripheral areas have probably remained the same or even increased (p. 274).

It also explains why all states, not just certain of them, are “imperialist” in the sense of being potentially expansionist and being prepared to use violence as a last resort. War is in fact just one of the ways states use to seek to distort the world market (others being mercantilism, protectionism, colonialism, tariffs, subsidies). War is a political means of pursuing economic ends.
Second, that there are not, nor could there be, any “socialist” states or countries in the world today. Wallerstein, despite his own personal sympathy (which we don’t share) for some of the states calling themselves “socialist”, is clear enough on this point:

The fact that all enterprises are nationalised in these countries does not make the participation of these enterprises in the world-economy one that does not conform to the mode of operation of a capitalist market system: seeking increased efficiency of production in order to realise a maximum price on sales, thus achieving a more favourable allocation of the surplus of the world-economy.
There are today no socialist systems in the world-economy any more than there are feudal systems because there is only one world system. It is a world-economy and it is by definition capitalist in form (pp.34-5).
The capitalist system is composed of owner who sell for profit. The fact that an owner is a group of individuals rather than a single person makes no essential difference. This has long been recognised for joint-stock companies. It must now also be recognised for sovereign states. A state which collectively owns all the means of production is merely a collective capitalist firm as long as it remains—as all such states are, in fact, presently compelled to remain—a participant in the market of the capitalist world-economy. No doubt such a “firm” may have different modalities of internal division of profit, but this does not change its essential role vis-a-vis others operating in the world-market (pp. 68-9).

Third, that virtually the whole of the world’s population, whether or not they are yet propertyless wage earners, are victims of capitalism in one way or another. (Wallerstein would add a fourth point, namely, that there is a world-wide division of labour between developed (“core”) and underdeveloped (“periphery”) countries such that the latter are condemned to permanent underdevelopment for as long as capitalism lasts. Whatever may be the validity of this proposition—which is not discussed here—it is not a necessary implication of the “world-system perspective”.
The logical conclusion to be drawn from all this is that it is all or nothing—world socialism or the continuation of capitalism in one form or another—in the sense that no single state or country on its own, no matter what policy it adopts, can escape from the logic of the world capitalist system. This is why we say that the only solution to the problems of all the population of the world, those in the underdeveloped countries as well as those in the advanced capitalist countries, is the replacement of the capitalist world-economy by world socialism.
Wallerstein, however, is not logical and does not draw this conclusion. As a Maoist fellow-traveller (even if he has now, rather belatedly, come to recognise that China is just as state capitalist as Russia—which was obvious to us even when Mao was in power) he supports Third World “national liberation” movements as a supposed aspect of the world’s population’s struggle against world capitalism, whereas his own analysis shows that they are in fact just part of the struggle among the various states of the world for a share of the surplus value produced by the workers and peasants of the world.
Adam Buick