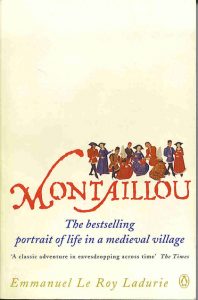 It is the turn of the 14th century; a small French village high in the mountains continues a tradition of life that has been rolling on for as long as anyone knows. There is a closely knit community of priests, minor nobility and peasantry, the latter free from the worst restrictions of feudal servility. Most peasants live as farmers, the poorer members being either shepherds (the men) or servants (the women). They are connected to, yet also cut off from, the mainstream of French social life.

The priesthood is more concerned with its own sexual appetites than any pretence at religion. Social values, which clearly predate capitalism, include freer sexual relations and a lack of the sexual prejudices which beset 20th century society. To take one obvious example, an unmarried mother is in no way discriminated against, either in terms of marriage prospects or generally. There is a lack of commitment to time keeping (other than by the seasons); little regard for money (very few money transactions took place); different social classes mix easily (the lady of the village sleeping with priest and peasant). But there is also a new and potentially subversive religion, Catharsism, the Albigensian heresy that threatens to undermine the Catholic Church by accepting a deity but rejecting the established priesthood.

Into this easy going, almost timeless, community descends Bishop Fournier, a fanatical Catholic who rounds up the Cathars in a series of inquisitions between 1318 and 1325. His enthusiasm for burning and imprisoning the Cathars knows no bounds. But the inquisitions are also meticulous and carefully document, incredibly lengthy statements from all the inhabitants of the village. These statements, painfully transcribed into Latin, have survived, and allow Ladurie to recreate the life of the community in minute detail.

It is a remarkable record and Ladurie’s patient reconstruction allows one to see into the very minds of the people of Montaillou. It is one of the most detailed pictures of the rhythms of pre-capitalist life of the non-privileged classes to have been published.

There are, however, problems with Ladurie’s work; no historian is neutral and Montaillou does suffer from contradictions. Ladurie seems to make no allowances for the potential distortion (conscious or otherwise) in the depositions of the rounded up villagers. He tends to be repetitive; the same story about the same love affair will appear in different contexts on several occasions. But perhaps this was almost deliberate; life was repetitive and the minutiae of the “sophisticated” peasant world of Montaillou needs time to appreciate. This book’s length may be part of its own structure. Anyone who wants to find evidence of the stupidity of the arguments about “greedy human nature” or the inevitability of conflict could do worse than get on the time machine and pay a visit to Montaillou.