The Briefing Column: The coming election in West Germany

This October the voters of West Germany will go to the polls to elect a new Bundestag (or Federal Assembly). There are three parties now represented in the Bundestag: the Social Democrats, the Christian Democrats and the Free Democrats. The present government is a coalition between the Social Democrats and the Free Democrats but in the past (and still today at regional level), the various other combinations Christian Democrats and Free Democrats, Social Democrats and Christian Democrats have also existed, thus neatly illustrating that the fight between these parties is largely a sham and that all three basically stand for the same thing: the maintenance of capitalism in West Germany.
The German Social Democratic Party (SDP) was. before the first world war, the biggest “Marxist” party in Europe, the party of Bebel, Liebkneckt, Kautsky, Bernstein and Rosa Luxemburg. It had already become a reformist party (as a result of its mistaken policy of trying to advocate both socialism and reforms of capitalism) well before the first World War, but from then on it was downhill all the way. In 1959, at a Congress held in Bad-Godesberg, the SPD finally abandoned all pretence at being in the Marxist tradition and came to reject even the state capitalism which had in the meantime become its longterm aim. It openly proclaimed its acceptance of the “market economy”, the mixture of private and state capitalism that exists in Western countries. And since 1966—until 1969 in coalition with the Christian Democrats and then in coalition with the Free Democrats the SPD has wholeheartedly participated in the administration of West German capitalism, running the capitalist system in the interest of those who live off profits derived from their ownership and control of the means of production. Like the Labour Party in Britain, it has provided a few sinecures for trade union leaders, but has had nothing to offer the working class as a whole.
In fact the SPD has even come to be regarded as the normal governing party for West German capitalism. The opposition Christian Democratic party (CDU) thus enters these elections with a handicap, especially as their leader, Franz-Josef Strauss, a loud-mouthed demagogue from Bavaria (where the party is known as the CSU, the Christian Social Union), has a reputation to live down. Because of his past strident “anti-communism”, he used to be depicted as a possible new post-war Hitler who, if returned to power, would seek to avenge Germany’s defeat in the last war. Strauss however is simply another professional capitalist politician who, if the CDU/CSU wins the elections, will be compelled to run the West German state in much the same way as it always has been since it was set up in 1949. “Rightwing” bogeymen, just as much as “leftwing”, once they come to power, are tamed by being obliged to run capitalism according to its dictates rather than according to their own desires. Whether Strauss or Schmidt ends up as Chancellor should be a matter of complete indifference to German workers.
The Free Democrats (FDP), roughly the equivalent of the Liberals in Britain, will be fighting for their lives in this election. West Germany has a complicated proportional representational system, which gives representation in Parliament to any party which has won at least 5 percent of the vote nationally. The FDP, unable to win in any local constituency, is only represented in the Bundestag on this basis and there is a distinct possibility that this time their national vote will fall below 5 per cent, as it has done already in some recent regional elections.
The main reason this may happen is the intervention of a fourth party, already represented in a few regional parliaments, Die Grünen, the Greens or ecologists, whose main plank is “Kern-kraft—Nein Danke (Nuclear Power—No Thanks). This is the “in” party among leftists in Germany these days, with the support of such names as Daniel Cohn-Bendit, Rudolf Bahro (almost the first thing he did on being let out of East Germany last year was to go to the congress of the Green party) and, until his recent death, Rudi Dutschke. The presence of such leaders of the “extra-parliamentary opposition” of a decade or so ago in the ranks of the vote-seeking, not to say vote-catching, Green party shows that, after all, such people are not beyond all hope. Cohn-Bendit has at least learned that, if you want to put your ideas into practice, you have to go through the ballot box (even if his ideas are still as confused as they ever were). 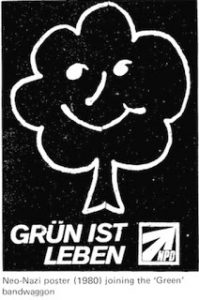 Also on the green bandwagon (but not linked with the above party) is the nine-day-wonder of a few years ago, the neo-Nazi “National Party of Germany” (NDP), one of whose stickers saying “Green is Life” we reproduce here. This is not so illogical as it might seem, since opposition to modern technology on behalf of landed interests has always been a trend of fascist thought. So, “green” voters will be able to vote for a “neo-leftist” or a “neo-fascist” according to their preference. All this should ensure that none of the minority parties, and perhaps the FDP neither, overcomes the 5 per cent barrier.
Any Socialists in West Germany will of course be writing “WELTSOZIALISMUS” across their ballot paper.
Adam Buick