The Dangers of Racism 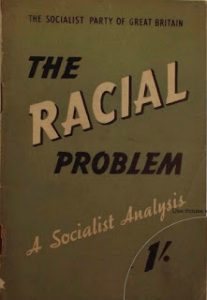 The root cause of modern race-prejudice is the capitalist system of Society, a society of competition and struggle: struggle between worker and worker. For the working-class, who constitute the overwhelming majority of its population, it is a society of poverty and insecurity: to most of them it offers not the slightest chance of escape from a lifetime of constant, heartbreaking effort to earn a living. For the working-class, it is a society which breeds war and strife, in which their masters, on whose behalf they fight, use every device to stimulate antagonism and hatred between them.
From the cradle to the grave, they are subjected to a mass of propaganda which deadens their minds, works on their prejudices, and endeavours by every means possible to turn their thoughts away from the real cause of their troubles. They are the tools of political leaders and demagogues who make them promises which they do not keep. Disappointed, they exchange one set of political leaders for another, whose promises are no more fulfilled than the promises of those before them. They become disillusioned, bitter, and cynical: fair game for dictators and “strong men” who promise to lead them to a “promised land”, but instead lead them into greater disasters and misfortunes.
All the time they are experiencing unemployment, poverty, insecurity, competition for jobs, struggles to “rise up the ladder”. They seek to escape from the harsh world of reality in dreams and games of make-believe, in football pools and cinemas, but only for brief moments, for capitalism soon brings them back to things as they are, and not as they would wish them to be. They still have to contend with poverty, unemployment, insecurity, and war. For the working-class, Capitalism is a society of mental, social, and economic frustration; as such it breeds race-prejudice as a swamp breeds pestilence.
To the extent that Socialist ideas permeate the minds of the working class, wherever they may be, to the extent that workers realise that their interests are in common, irrespective of race, and opposed to the interests of the capitalist class, irrespective of their race, to that extent they will become proof against race-prejudice and will work together for the establishment of Socialism which will end, once and for all, the problem of race-prejudice.
In the words of our Declaration of Principles: “. . .  the emancipation of the working class will involve the emancipation of all mankind without distinction of race or sex”.
From SPGB pamphlet “The Racial Problem — A Socialist Analysis” (1947).