A way out of the mess? 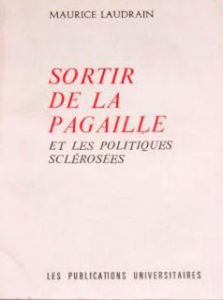 In the February Socialist Standard we published an article — The French Movement for Abundance — which critically examined the ideas of an organisation called the Mouvcmcnt Français pour L’Abondance. In this issue of our journal, which deals in some detail with socialism and how and why it will be established, we think it is of interest to publish an article which looks at another organisation in France which has some interesting ideas.

Socialism means different things to different people. To some it means social reforms, to others state ownership of industry, to others the kind of one-party state that exists in Russia or China. Very few people however view socialism in the same way as the Socialist Party of Great Britain, that is as a worldwide society without buying and selling in which production takes place not for profit but solely to satisfy human needs. Since its formation in 1904 the SPGB has defined socialism in this way and so it is always refreshing, in a world overwhelmingly hostile to our ideas, to meet with individuals or organisations whose view of socialism bears some similarity to our own.
One such example is to be found in a recently published book in French by Maurice Laudrain[1] illustrating the ideas of an organisation called the Centre de Prospective Socialiste. In the book Laudrain points out that all the so-called “Socialists” and “Communists” at present vying for power in France are bent, not on doing away with capitalism, but on administering it. For Laudrain capitalism means the whole economic system of buying and selling which keeps a small minority extremely rich and powerful and the vast majority, all those who depend on a wage or salary, relatively poor, problem-ridden and powerless. This system, he argues, has as its lynch-pin “profitability” which “sacrifices on its altar the interest of peoples”(p.53), brings insoluble problems such as unemployment and corruption, and prevents the realisation of the abundance of goods and services which modern technology is capable of producing. “The way out of the mess”, according to the author, is through the abolition, by democratic means (by people consciously voting for it) of the present “exchange economy” and the introduction of what one of his mentors, Jacques Duboin, termed a “distributive economy of abundance”(p.144). Therefore those few already conscious of the need for such a change “must make an immense effort to spread their ideas and educate people to accept them”(p.l69).
So far so good. A sound analysis which could easily tempt us to see a companion socialist organisation growing up in France. But unfortunately a close reading of the book yields some crucial snags which would make any association between the SPGB and the Centre de Prospective Socialiste quite impossible.
First and foremost the kind of society advocated by Laudrain is to be established not on a world-wide scale but in France alone, in the hope that later other countries will follow its lead. To the question: ‘How could a single isolated country have the resources to satisfy the needs of all its population and how, anyway, could it possibly stand up to a hostile capitalist world around it?’, the author’s reply is that “we must look for support to the only anti-capitalist forces” (Russia and China) (p.180). Here we meet the long perpetuated myth of state capitalist countries like Russia and China having something to do with socialism. This is all the more surprising, as the author has correctly described capitalism as an “exchange economy”. How he can therefore see the exchange economies of Russia and China as anything other than capitalist is quite perplexing. One wonders too how he can fail to see the capitalist nature of these countries in their engagement in the same kind of military rivalry for world markets, trade routes and raw materials as carried on by the avowedly capitalist countries of the West.
In fact Laudrain hopes that a “Socialist France” would continue to do business with the capitalist countries around it—business based on exchanges of goods rather than of currency, in the same way as the countries he styles “anti-capitalist” trade with the capitalist West.
However the economic model he visualises for his new France is not that which operates in those “anti-capitalist” countries. What he favours (and this is not surprising for someone who wants to do away with buying and selling) is the abolition of money and the wages system. But (and here is the rub) his alternative is not free access to all goods and services according to the dictum: ‘from each according to his ability to each according to his need’, but a “new” system of non-circulating labour vouchers whereby people would have access to goods according to the number of hours’ work they put in.
Now this idea is nothing new. As the writer himself points out, it goes back to Marx’s conception of how socialism would work in its earlier stages until the techniques of production had been built up sufficiently to meet people’s needs without rationing. Now, over a hundred years later, advanced technology has created such a potential for abundance that society, once the majority of its members want it, can pass immediately from the wages system to complete free access without any intermediate stage of rationing.
That this immediate creation of abundance could not take place in a single country is self-evident and is what has led Laudrain to propose labour tokens as a means of distributing the necessarily limited wealth of one country (France) among its population.

Both labour vouchers and the detailed (24 page) blueprint drawn up by the Centre de Prospective Socialiste for the management of the new French society are quite unnecessary anyway. The similarity of conditions and problems which capitalism has imposed on the whole advanced industrial world and the speed of modern communications mean that once socialist ideas have become so widespread as to be irresistible in a country like France, that same process will have operated in Britain, USA, Germany, Italy, Russia . . . And once socialism is democratically established as a world system, it will be up to the majority who have established it to decide then, democratically, on the precise details of its structure and day-to-day management.

If Maurice Laudrain and the Centre de Prospective Socialiste sincerely aim at a revolutionary change to a society organised on the basis of human need instead of profit, we would invite them to look closely both at our criticism of their views and at the case we put forward for the establishment of such a society