Book Review: The World on Our Backs 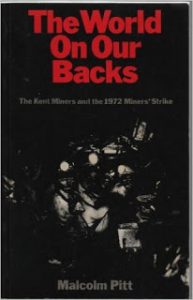 The World on Our Backs by Malcolm Pitt, Lawrence & Wishart, £2.95

The 1972 Miners’ strike was classic confirmation of the socialist case on industrial action: by combining in unions, and by appropriate use of the strike weapon, workers can force their capitalist employers to disgorge a little more of the wealth taken from them in the process of exploitation.

This book, written by one of the Kent miners, is a somewhat anecdotal account of their picketing of power stations and coal depots in the South East, and particularly the London area, in the course of the strike. It was of course this picketing which, by closing down the power stations, eventually forced the Conservative government of the time to back down through the face-saving formula of a Court of Enquiry. In record time—the strike was still in progress—the miners were awarded a substantial wage increase, way outside the limits the government was trying to impose.

Normally, the longer a strike goes on the less chance there is of a successful outcome, but in this case the miners enjoyed considerable public sympathy, which deterred the government from taking tough action (such as using the troops to move coal). Above all the strikers benefitted from the solidarity of transport workers, without whose refusal to cross picket lines the power stations would not have been closed.

A point which is often overlooked regarding the strike is that it was essentially defensive: most miners had suffered a cut in their living standards and were merely demanding that a previous standard be restored. As Pitt makes clear, many faceworkers, especially in Yorkshire, Nottingham and Kent were actually earning less money than they had been five years previously—thanks to a new wage structure introduced with the agreement of the National Union of Miners which essentially only benefitted face workers in low productivity areas. It was this that made the miners so determined to fight.

According to Pitt (who joined the so-called Communist Party in 1974) “the miners’ determined offensive on the picket line sparked off a whole process of united trade union action that opened up a completely new stage in the progress of the working class to Socialism”. This is nonsense. The miners’ strike of 1972 (and of 1974) was purely defensive action on the issue of wages. Necessary, heroic even, but still nothing to do with socialism—the abolition of the wages system by political action. Until socialism is achieved trade union activity, including strikes, will be necessary, just to maintain living standards. However, such running fast to stand still will not remain forever the objective which the working class sets itself.