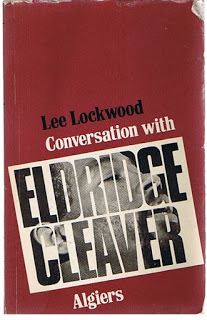 The blurb of this book describes Eldridge Cleaver as “. . . an outstandingly fine writer, a brilliant theoretician and polemicist . . .  a dynamic, eloquent and fascinating talker.” And if that does not put you off you deserve all you get.

In fact the contents — a brief account of how Cleaver came to leave America and end up in Algiers, followed by a record of Lockwood interviewing him — is not so overpoweringly obsequious. Yet it is still, in the familiar Playboy style, a vehicle for telling us by phony probing, aggressive questions, just how brilliant a man Cleaver is.

And what does the brilliant man have to say? His conception of Socialism is something which can happen in one country, any country but which he wants in America — “a Yankee Doodle Dandy version of Socialism” he calls it. He defends what has happened in Russia with the wearisome excuse that “. . . the whole process of developing a socialist system has been distorted by security considerations.”

Little wonder that he is also a hopelessly confused admirer of the set-up in Cuba and China and that he thinks Socialism can be reality only through a violent upheaval. In fact, like Old Mother Shipton, he even has a date for this — by 1972 there will be full scale war going on in the United States and the Presidential election will be out of the question. After that the revolution . . .

In the meantime, this eloquent, fascinating talker expresses himself in such ways as “. . . the shit gets all fucked up and twisted up and you end up in the John Birch Society.” Of course Cleaver is capable of better than that; presumably it is in the book just to prove how human and earthly he is and that after all this is 1971. Perhaps we ought to be warned off by that blurb, after all.