Geoffrey Sampson: Liberty and Language. Oxford University Press, £5.75.
Professor Noam Chomsky of the Massachusetts Institute of Technology is the 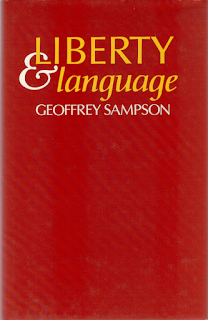 world’s foremost linguist, founder of the revolutionary theory of transformational grammar. He is best known, however, not as a linguist but as a political writer, a powerful critic of the American involvement in Vietnam and advocate of a rather vaguely-described decentralised anarcho-syndicalist society. He sometimes links his linguistic and political views, though rather loosely, the general claim being that the speed and ease with which children learn their native tongue is evidence that they must be born with some innate knowledge of the basic characteristics of language. From this it follows that the mind is not a “clean slate” and that therefore people are not totally malleable, able to have their ideas and behaviour moulded by governments and others.

In this extended critique of Chomsky, believes that the facts of language lead us to adopt a very different kind of political philosophy. He argues that the use of language is creative, in that we can all talk about things and ideas which were once non-existent and indeed unimaginable. He concludes from this that people’s minds are creative, and that this is evidence for the political position which he terms liberalism, by which he means the free-enterprise type of capitalism advocated by such as Hayek and Friedman.

In a truly liberal society, as Sampson sees it, the main task of government will be to maintain the free market, the production and distribution of goods being controlled exclusively by the impersonal mechanism of free competition. Any individual should produce goods by whatever method they choose and sell them for whatever price they can get. Those individuals whose enterprise or labour command relatively high prices are to be rewarded proportionately, and the prospect of higher rewards will act as an incentive to innovation and entrepreneurship. A liberal society encourages and rewards unforeseen innovation and is thus uniquely able to harness the potential of the human mind, the creative powers of which are attested by the use of language.
Naive people might object that such a society would give rise to gross inequalities. But this would not count as an objection to Sampson, since he positively glories in privilege and inequality. Here we resort to direct quotation, on the grounds that a mere paraphrase might not be believed:

What justifies the inequalities of wealth which will exist at any given time in a liberal society is that the total of wealth increases most rapidly in such a society, and that this increase in total wealth benefits those on the lower as well as those on the higher rungs of the economic ladder.

The prospect offered is not so much one of “jam tomorrow” as of jam in two or three generations’ time.
But the fact is that such inequality and poverty are quite unnecessary now, and have been for decades. Technical resources are more than sufficient to provide an abundance for all humanity, and what prevents this happening is precisely the profit motive which Sampson sees as so wonderful. There is a clear distinction between an innovation that will be beneficial to mankind and one that will be profitable. Far from promoting wealth production, the profit motive creates artificial shortages by discouraging production and destroying goods already produced.
Moreover laissez-faire capitalism cannot work in the way Sampson imagines it can. For instance, he believes that a fully liberal society automatically means full employment, though presumably he would hardly claim that anything approaching it has existed in the societies which he secs as close to the liberal ideal, the United States and nineteenth-century Britain. And he ignores all the consequences for the working class of the poverty he so willingly accepts: poorer education, housing and health care, boring and degrading work, total lack of any say in how their lives are organised, insecurity, the danger of wars, and so on. The “liberty” he mentions so often is the liberty of the capitalist class to exploit the workers (who won’t even be allowed to organise trade unions to fight back a bit).
It is clear that Sampson’s knowledge of the world outside the confines of his own study is fairly limited. His understanding of Marxism is also abysmal; for one thing, he fails to see that Marx’s theory of increasing misery has to be interpreted in relative not absolute terms. For another, his criticism of the precept “from each according to his ability, to each according to his needs” is on the daft grounds that it is meaningless, since what people need and can produce are themselves facts that emerge only from the “competitive process”. But the obvious fact that abilities and needs depend on society (not on competition) in no way impairs the desirability and practicability of this principle.
Sampson never deals with the possibility of socialism, since his “alternative” to liberalism is simply a variant of capitalism, termed “authoritarianism”. This is described as a society where “those who govern” determine production and distribution patterns, rather than the free market. Actually, this is not an alternative to liberalism, but merely a necessary aspect of any capitalist society: even in Sampson’s ideal world, the rich and powerful will determine production patterns when they decide what to produce and how much. Such production decisions have to be made in any society.
So Sampson’s defence of capitalism is neither original nor at all convincing. His role as bourgeois ideologist is utterly transparent. In The German Ideology, Marx and Engels refer to the ruling class’ “active, conceptive ideologists, who make the perfecting of the illusion of the class about itself their chief source of livelihood.” This describes very nicely the function of Sampson’s arguments, which are a contribution to the way the capitalist class sees itself or would like to see itself. We have quoted above his feeble justification of privilege and poverty, and we can add here his claim that profit is “the reward to the enterpriser for the production of useful economic knowledge”. This phrase is a strong candidate for the Socialist Standard Prize for the silliest remark of 1979. The capitalists love to see themselves as the most intelligent, go-ahead and competent members of society, who have reached their privileged position through their own ability to come out on top in free competition— and more importantly, that is how they want the working class to see them. It is to the perfecting of this illusion—for that is what it clearly is—that Sampson’s pen is dedicated.
The fact that we can all make creative use of language does not justify the existence of oppression and exploitation—and neither does anything else, for they are simply unjustifiable.
Paul Bennett