Now the election is over you may be forgiven for wondering what all the fuss was all about. Maggie is well installed in the power seat she so blatantly wanted, the Labour Party is licking its wounds, the Liberals are picking up the pieces of Steel’s Battlebus (or was it a blunderbuss) and one or two kilted academics are doing historical theses on the rise and fall of the SNP.

POST-ELECTION QUIZ
But back in the council houses and the factories, one thing has emerged; nothing much has happened. The change is in inverse proportion to the noise that the parties of capitalism made during the election campaign. Most people are still workers. So in order to brighten your day, here is a simple quiz. Here are quotes from Labour, Liberal and Tory Manifestos and material for the 1979 Election. Your job is simply to identify who said what. Answers below, together with an assessment of your results.

1. Employment
(a) The . . . will pursue policies which give a high priority to the return of full employment
(b) We need to concentrate more on the creation of conditions in which new, more modern, more secure, better paid jobs come into existence
(c) We have an unjust industrial society in which most workers are pitted against management and are denied any share in decision taking or in profits

2. Housing
(a) In the first session of the next Parliament we shall therefore, give Council and New Town tenants the legal right to buy their own homes
(b) Councils should be required to build more homes for sale
(c) . . .  does not oppose the sale of Council houses to sitting tenants who want to buy

3. Education
(a) We see education and training as a lifelong process that must be as widely available as possible to people of all ages
(b) The . . . party believes in equality of opportunity
(c) We must restore to every child, regardless of background, the chance to progress

4. The Individual
(a) Our policy will be to tilt the balance of power back to the individual and the neighbourhood, and away from the bureaucrats of Town Hall, Company Board Room, the Health Service and Whitehall
(b) Bureaucracy and powerful organisations triumph at the expense of individuals who feel powerless to influence decisions that affect them
(c) I want to expand peoples’ rights, not restrict them. I want people to have more say in their own lives

5. Europe
(a) We therefore, propose fundamental reform of the Common Agricultural Policy to produce competitive prices, avoid structural food surpluses and encourage efficient farming
(b) Our policies for the reform of the CAP would reduce the burden which the community budget places upon the British tax payer
(c) The CAP raises serious problems for British Agriculture — distorting the balance of production; decreasing consumption through inflated prices in the shops; and stopping the industry from growing. That is why . . . seeks a fundamental reform of the CAP.

6. Law and Order
(a) We will fight against crime and violence, which affect all western societies. We will continue to back the police with proper resources and manpower
(b) The steady increase in crime can only be checked in the short run by recruiting many more police, by improving working conditions . . . having the greatest practicable number of policemen “on the beat’’ by day and night
(c) Surer detection means surer deterrents. We also need better crime prevention measures and more flexible, more effective sentences. For violent criminals and thugs, really tough sentences are necessary. But in other cases, long prison terms are not always the best deterrent

7. Environment
(a) The quality of our environment is a vital concern to all of us . . . We shall continue to give these issues a proper priority. Subject to the availability of resources we shall pay particular attention to the improvement and restoration of derelict land, the disposal and re-cycling of dangerous and other wastes and reducing pollution
(b) . . . is proud of its record on environmental matters. . . . will: develop policies for resource conservation. Use our campaign for a better environment to provide the basis of secure employment, for example in pollution control and in waste re-cycling
(c) 1. Conservation and wiser use of scarce resources especially land and energy; 2. War on waste and pollution; 3. Tire need to preserve the natural environment for future generations 4. A re-ordering of our economic and social priorities to put them on a sounder basis

8. Northern Ireland
(a) For the present direct rule remains the only viable alternative. Any change can be made only with the consent of the people of Northern Ireland. We will work to make it more accountable and democratic
(b) Its future still depends on the defeat of terrorism and the restoration of law and order
(c) There must be no capitulation to violence. Direct rule must continue for the time being

9. Women
(a) Equal opportunities for men and women in all spheres, especially equal pay for work of equal value
(b) We will progressively eliminate the inequalities that still exist in the social security and tax systems
(c) (NB One of the parties appears to have nothing to say on the subject. When I telephoned their head office the spokesperson said they were in favour of equal rights for women)

10. Animals
(a) We shall update the Brambell Report, the codes of welfare for farm animals and the legislation on experiments on live animals. We shall also re-examine the rules and enforcement applying to the export of live animals
(b) We will have stronger control on the export of live animals for slaughter, on conditions of factory farming and on experiments on live animals
(c) Support for demand of the General Election Coordinating Committee for Animal Protection for a Royal Commission on Animal Welfare

11. The Promises
(a) I appeal to you, as a voter concerned with what is best for Britain, to throw your support behind the fresh approach which the . . . party represents
(b) We make no lavish promises
(c) It is the message of hope for the future based on a record of promises kept, that . . . . puts to the British people

Answers to quiz at the bottom of the post

How did you score?

“That quote was taken from the manifesto of a capitalist party; one that stands for a society which puts profitability first; one which supports a world of mass starvation and food surpluses; a world of shortages and under usage of potential both in terms of labour and physical resources—a world of stock piled weapons of destruction; a world where a full satisfying life is denied to the majority. That is—capitalism. That is what Labour, Liberal and Tory all stood for in the last Election”.

Answers to the Election Quiz 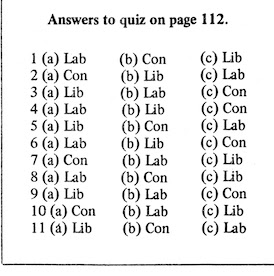