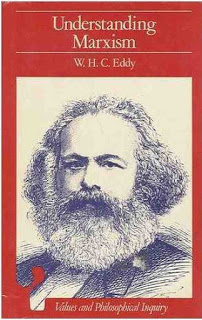 Blackwell 1979 (£2.95 paper)
This little book is certainly original. It takes the Socratic form of a three-cornered discussion on Marxist Philosophy, Historical Materialism, the Class Struggle, the State, Ideology. Religion, Scientific Socialism, Capitalism and the Dictatorship of the Proletariat. Whether the text is an actual record of what took place is not stated, but the discussions were sent to all the study groups of the Workers’ Educational Association in Sydney, Australia, as material for a study course, and are well worth application by branches of the SPGB.
The speakers consist of a self-styled “Marxist”, an anti-Marxist, and a novice who interjects every now and again ‘‘what does that mean?” The book has the merit of extremely simplified, direct language and the interruptions (“I don’t get that point”) enable the speakers to reiterate their arguments.
The text is remarkable for its complete omission of any mention of Marx’s economics, the corner-stone of his system. Most of the latter half deals with Lenin’s aberrations from, and distortions of, Marxism, particularly with reference to the ‘‘Dictatorship of the Proletariat’’, quoting one of the best books on the subject. Lucien Laurat’s Marxism and Democracy.
The book is not without other defects; the Marxist speaker (Allen) holds that Marxism cannot prove objectivity, because Lenin said so. As is well known, Marx wrote that “the point is to change the world, not interpret it.” He never proclaimed that capitalism would collapse, neither for that matter did Lenin. Socialism is not the common ownership of “means of exchange”, which it will abolish. It is not right that all the “Marxists” (meaning people calling themselves that) told Lenin that Socialism could not be established in Russia in 1917. The British Socialist Party went overboard for Leninism, forming the Communist Party.
The Socialist Labour Party said in The Socialist that the Russian Soviets represented De Leonism (SLP) applied to Russia. At least half the ILP supported the Bolsheviks. A huge congress was held in Leeds, attended by Ramsay Macdonald. Sydney Webb, national trade union leaders, writers and politicians, which passed resolutions calling for “Soviets in Britain”. There was one group in Britain which did not support the idea of Socialism in Russia in 1917. It was The Socialist Party of Great Britain.
Horatio.