When I went to see the National Youth Theatre’s production of Peter Terson’s England My Own I spent a good part of the evening watching the audience. The question that concerned me as a Socialist was, what is the play trying to say to the 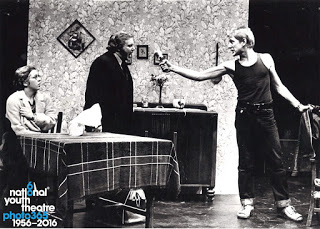 audience and how well does it succeed? Traditional theatre critics evaluate plays on the basis of supposedly aesthetic criteria : they are concerned with the play as such. The concern of this review is with the play as a medium of idea and image projection to the audience. Theatre always involves a separation between the image-projecting performers and the image-consuming audience. This relationship provides considerable power for those who own the means to produce plays for large audiences.

The main criticism of England My Own—and, indeed, of much of what describes itself as ‘political drama’—is that the images it throws out to the audience are all too readily and complacently lapped up, as if the audience has come for its periodic dose of liberal sentiments which it can absorb without having to think. Just as Crossroads panders to those who readily accept its image of society as being real, the National Youth Theatre are pandering to an audience of liberal trendies who know when to boo at the baddies and cheer on the goodies. Good pantomime it is, politically stimulating it isn’t.

England My Own is the story of how a youth, Adam Butler, is driven to join the National Front and is eventually killed while carrying a Union Jack through a West Indian carnival. The events leading to this fatal climax rely on stereotypes (often offensive) and situations which sound as if they were invented by a supporter of the National Front. So, we are shown Adam Butler being badly educated by a trendy teacher (while his Indian classmate who, like all caricatures of an Indian student, wants to become a shopkeeper, studies diligently), refused the position of Head Boy because the liberal headmaster believes that a black pupil should have the prestige, given an apprenticeship under a caricature of a bigoted and indolent cloth-capped worker, sent to borstal where he is disciplined to obey and finally, after his granny is molested by hooligans, is persuaded to join the National Front by a caricature of a repressed homosexual who dresses up in a Nazi uniform.

Many of these scenes were amusing and the acting often perceptive, but the question still remains, why did the audience laugh? What’s funny about a racist carpenter who drinks tea all day? This is just another variation on the ‘all workers are lazy’ theme. Why laugh at the illiterate NF Northerner who was conned into the party? Behind this lies the assumption that politics isn’t for the working class.

Why have the National Front organiser as a uniformed homosexual? This is only a step away from the logic which says that gays should be kept away from little children. Stereotypes lead the audience to accept certain images about capitalism—images which are just as pernicious as those which back up the National Front.

This is not to say that theatre cannot be used to challenge capitalist values. Political themes can sometimes be dealt with most perceptively in the dramatic form. But in England My Own the audience was simply shown what they expected to see and never anything likely to shake them from the complacent liberalism which is characteristic of the current ‘anti-fascist’ movement. Not once were they told that there will always be the threat of fascism as long as we have capitalism; that leaders are harmful whether they wear uniforms or not; that even if Adam Butler had not become a martyr to a futile cause, his endless problems would still prevail because he is a member of the working class.

England My Own was theatre for pleasure and workers are never going to reject capitalism while they are entertained by it. Consider the comments of Bertolt Brecht, written many years ago. but perhaps the best summary of the inadequacy of political drama today—and its possibilities:

The dramatic theatre’s spectator says: Yes, I have felt that too— Just like me—It’s only natural—It’ll never change—The sufferings of this man appal me, because they are inescapable—That’s great art; it all seems the most obvious thing in the world—I weep when they weep, I laugh when they laugh.
The epic theatre’s spectator says: I’d never have thought it — That’s not the way—That’s extraordinary, hardly believable—It’s got to stop— The sufferings of this man appal me, because they are unnecessary— That’s great art; nothing obvious in it—I laugh when they weep, I weep when they laugh.(“Theatre for Pleasure or Theatre for Instruction” in Brecht on Theatre, ed. John Willett, Methuen)