Thomas More and the abolition of money

This year is the 500th anniversary of the birth of Sir Thomas More, one of 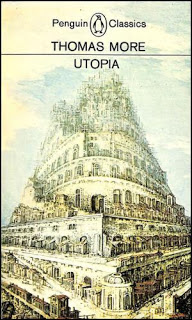 Henry VIII’s Lord Chancellors, Catholic martyr and saint, feature of the film A Man for All Seasons—and, though less publicized, early advocate of a moneyless society.
It was through More than the word “utopia” came into the English language as this was the title of a book he published in Louvain (in what is now Belgium) in 1516. “Utopia” is the latinized version—for the book was written in Latin—of a Greek word meaning “nowhere” and More’s Utopia was an account of an imaginary island where society was organised without money and on communistic lines. It also contains a biting criticism of social developments in England at that time where the substitution of sheep-farming for tillage was driving hundreds of thousands of peasants off the land and into vagabondage.
Despite this More was in 1529 chosen by Henry to be Lord Chancellor. He later fell out with Henry and was executed in 1535 for refusing to recognise him as the spiritual head of the Church in England.
The passage reproduced below (taken from the translation by Paul Turner published as a Penguin Classic in 1965 and still available) shows why More has always been sympathetically regarded by Socialists.

Every town is divided into four districts of equal size, each with its own shopping centre in the middle of it. There the products of every household are collected in warehouses, and then distributed according to type among various shops. When the head of a household needs anything for himself or his family, he just goes to one of these shops and asks for it. And whatever he asks for, he’s allowed to take away without any sort of payment, either in money or in kind. After all, why shouldn’t he? There’s more than enough of everything to go round, so there’s no risk of his asking for more than he needs — for why should anyone want to start hoarding, when he knows he’ll never have to go short of anything? No living creature is naturally greedy, except from fear of want — or in the case of human beings, from vanity, the notion that you’re better than people if you can display more superfluous property than they can. But there’s no scope for that sort of thing in Utopia.

When I consider any social system that prevails in the modern world, I can’t, so help me God, see it as anything but a conspiracy of the rich to advance their own interests under the pretext of organizing society. They think up all sorts of tricks and dodges, first for keeping safe their ill-gotten gains, and then for exploiting the poor by buying their labour as cheaply as possible. Once the rich have decided that these tricks and dodges shall be officially recognized by society — which includes the poor as well as the rich — they acquire the force of law. Thus an unscrupulous minority is led by its insatiable greed to monopolize what would have been enough to supply the needs of the whole population. And yet how much happier even these people would be in Utopia! There, with the simultaneous abolition of money and the passion for money, how many other social problems have been solved, how many crimes eradicated! For obviously the end of money means the end of all those types of criminal behaviour which daily punishments are powerless to check: fraud, theft, burglary, brawls, riots, disputes, rebellion, murder, treason and black magic. And the moment money goes, you can also say good-bye to fear, tension, anxiety, overwork and sleepless nights. Why, even poverty itself, the one problem that has always seemed to need money for its solution, would promptly disappear if money ceased to exist.

Let me try to make this point clearer. Just think back to one of the years when the harvest was bad, and thousands of people died of starvation. Well, I bet if you’d inspected every rich man’s barn at the end of that lean period you’d have found enough corn to have saved all the lives that were lost through malnutrition and disease, and prevented anyone from suffering any ill effects whatever from the meanness of the weather and the soil. Everyone could so easily get enough to eat, if it weren’t for that blessed nuisance, money. There you have a brilliant invention which was designed to make food more readily available. Actually it’s the only thing that makes it unobtainable.