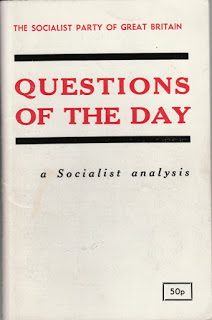 worthwhile to read the Socialist Party’s new pamphlet Questions of the Day (price 50p, or 65p by post from Head Office). The previous edition of this pamphlet was published in 1969, and a number of chapters have been added to the new edition.

However, it is a measure of the correctness of the Socialist analysis and of the fact that the problems thrown up by capitalist society remain essentially the same, that we have seen no need to revise the greater part of the pamphlet’s content. But this in no way means that it is out of date, any more than our Declaration of Principles is out of date just because it was formulated over seventy years ago. For the simple fact is that the basic features of capitalism have undergone no fundamental change since 1969 or even since 1904. The socialist case on parliament, reformism, trade unions, overpopulation, human nature and so on remains as valid and as cogent as ever.

This is not to say, though, that Socialists are not confronted by new events and new challenges. In particular, the rise of a Women’s Liberation movement over the last decade has necessitated the inclusion of a chapter on Women and Class. This chronicles the involvement of women in production, and the struggle (not supported by the SPGB) to gain the vote on equal terms with men. The modern women’s movement is analysed in a way that should be thought-provoking for its members and sympathizers. It is not in women’s interests to “achieve” equal exploitation with men under capitalism, but to work for a world of freedom and equality for all. In the words of Clause 4 of our Declaration of Principles, “the emancipation of the working class will involve the emancipation of all mankind without distinction of race or sex.”

Inflation and unemployment also merit an additional chapter. Inflation is explained as being due not to wage increases but to an excess issue of inconvertible paper money. The inability of Keynesian policies to prevent the recent tremendous rise in unemployment is exposed. The anarchy of capitalism means that politicians’ attempts to produce permanent full employment are doomed to failure.

The chapter on the Chinese revolution, together with our pamphlet Russia 1917-1967, shows quite clearly why the state capitalism which exists in China and Eastern Europe is emphatically not Socialism but just an alternative method of organising the wage-labour-capital-prices-profits system. A chapter on the so-called left-wing parties illustrates their commitment to reformism and to anti-Marxist ideas.

All in all, every worker should find something of interest in this handy and comprehensive pamphlet. It is both a useful work of reference and an ideal introduction to the case for Socialism.