Make No Mistake About It 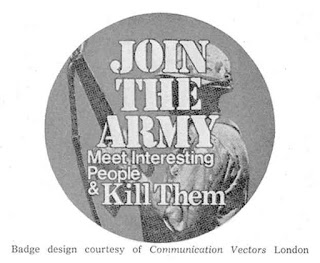 John Smith is a painter, Bill Brown is a clerk, and so on; five upright young men. Those weren’t the names nor, one supposes, were the ones on the poster the real ones. What have they got in common? Yes, we know they are all members of the working class, but the poster wasn’t put up by the SPGB. They are, in fact, all in the Territorial Army. However, unlike the usual recruitment advertising, these young men were not shown “learning a useful trade”, seeing the world, or doing anything which would ensure rapid promotion on their return to civilian life. This poster makes no bones regarding what joining the Army is all about (perhaps that is why it was so quickly withdrawn!). Facing the viewer directly, each one carries a submachine-gun.

The correspondence columns of the Daily Telegraph of 20th April were headed “Land of Equal Opportunity”. The first three letters dealt with one of to-day’s “in” subjects — women’s right to be exploited at the same level as their male fellow workers. The last letter, from Lord Monson, ridicules (wittily and quite justifiably) the Equal Opportunities Commission’s injunction to parents to check their children’s books for “sex-assumption rôles”. So far so good. However, in his penultimate paragraph he refers to “the stomach-churning revelation that female recruits to the fighting branches of the United States armed services were being taught to shriek the words ‘kill, kill; hate, hate; murder, murder; mutilate, during bayonet practice”.

We too are appalled. Unlike Lord Monson however, who seems to see nothing wrong in men being taught to shriek ‘stomach-churning’ obscenities during bayonet practice, we protest at the fact that workers are not just taught that it is right to kill each other, but to the accompaniment of chants of hate. MAKE NO MISTAKE ABOUT IT whatever the advertisements (usually) say about the wonders of a career in the Armed Forces, they are about KILLING; workers killing each other at the behest, and in the interests of, their real enemies — the capitalist class.